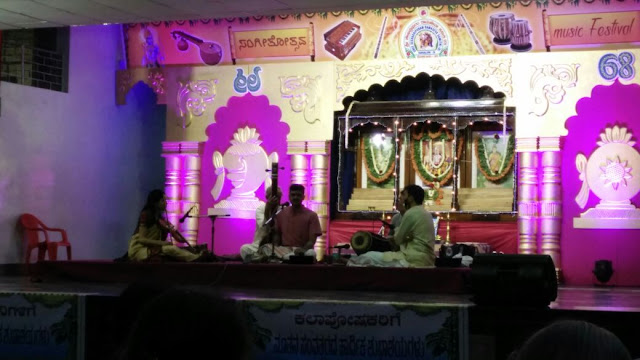 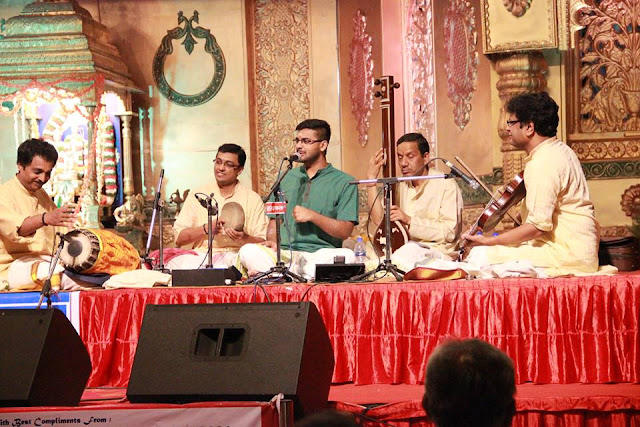 Indian classical music thrives on the inherent tension between the old and new. The art form and its grammar are fairly hoary (even if you don't go back all the way to the sAma vEda, the modern form of the music itself is at least a couple of centuries old - the time of the Trinity). However, each performance is in-situ and in the current moment.

The challenge for any performer to create something new and unique everytime s/he steps on the stage, while maintaining the link to the base grammar.

Vidwan Ramakrishnan Murthy (referred to as RKM here-on) is one of the most exciting young talents in our art form. To me, what distinguishes him from most of his contemporaries is his focus on rakti rAgas, wherein most other young singers seem taken in with the scalar ragas like kiravANI, latAngI or the multitude of aUDavA ragas that abound our rAga landscape. This also reflects in his more relaxed kAlapramANa as against the thrill of speed that seems to catch most other youngsters' fancy.

The evidence of this was on full display across the two days - the choice of rAgAs seemed a throwback to a time long gone. Also, he took up two purandaradAsa compositions as main pieces on both days - my usual carp has been that the pitAmahA's music has been usually relegated to fast fillers and the tukkaDA section!

On day 1 (27 Apr), we had bilaharI, maNirangu and pUrvikalyANI as the main rAgAs that were elaborated. Even the shortened pieces were in mAyAmALavagAULA, AhirI and bahudArI.

It's been a long time since I heard an elaboration of bilaharI, and it was a very pleasant experience to say the least. The kritI was new for me at least - a purandaradAsa pada in khandachApu, very reminiscent of tOLi janma and paridAnamicchitE. Elaborate neraval was also done in the charaNa.

maNirangu was taken up for elaboration, followed by mAmava paTTAbhirAmA - the only regret was that that neraval was not taken up - he seemed to halt at navaratna maNTapE as if deciding whether to launch into neraval but sadly decided against it. Otherwise, a classical rendition, followed by what was to be the first of the two tanI AvartanEs of the day.

pUrvikalyANI was chosen for RTP. The pallavI sahitya (daSharatha bAla rAmachandrayyA dayAnidhE) is quite an old one, and it was presented in miShra triputA. After the rAgamAlikA swara prasthAra, a second tanI AvartanE was taken up. In PK rtp when he took ragamalika swaras, a garland of 5 to 6 ragas with one round each and, the concluding round was continuous rendition of all six ragas in returning order ending with PK was good, of course if his voice had cooperated it would have  been a grand rtp

The accompanists were exceptional - the tone of the violin and the mridangam need to made special mention of.

- - - - - - - - -
The second concert at SRSM was an equally grand affair, with the two main rAgAs being varALI and ShankarAbharaNam.

He started off with two ShlOkAs, on vinAyakA and brihaspatI, followed by brihaspatE as the vara kriti for the day.

After a brisk evaraNI, he settled into the first big AlApanE of the day and a grand varALI it was. He then surprised the audience further by taking up kana kana ruchirA and went on to do neraval and swara prasthArA at kaminchI prEma mIra. Its been a long while since I heard a pancharatna kriti being taken up for elaboration in this manner - the last was TMK a few years back with jagadAnanda kArakA. Of course, the unique MDR would take up these grand pieces for elaboration, particularly endarO mahAnubhAvulU.

The main rAgA for the day was ShankarAbharaNa, and pOgadiralO rangA of purandaradAsA was taken up. I have heard two versions of this from the past masters - one from MLV and another from KVN. RKM's rendition followed the KVN paThAntarA.

After the ShlOkA (vAmE bhUmi sutA) which he finished with khamAs, he moved on to brochEvarevarurA.

While the quality of music was as usual of the highest order in both concerts, RKM's voice is somehow showing some signs of strain. While there were no lapses in Shruti, he seemed to be making more of an effort than his usual carefree style. Hope it is a temporary occurrence (as they say in Cricket - form is temporary, but the class is permanent), and not due to overuse or something else that could lead to long term damage.

These 2 concerts have ensured my guaranteed attendance to RKM when he visits next to Bangalore in August 2016.
at April 29, 2016