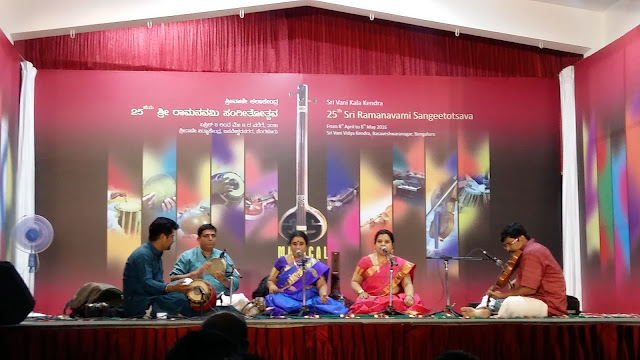 When a hot summer day drains all your energy at 40 Deg C, all you need is a soothing music to rejuvenate. When you attend it, you get more energised than expected... and you lose sleep over the freshness gained.

That's exactly what happened yesterday as I reluctantly pushed myself to attended the concert at Vani School.

This was the first time I'm attending the concert of the lead artist for the day.

The very first ball of the game went in for a Sixer. While the popular singers of the day only dwell with aTa / Adi tALa varnas, a miSra jhampe tALa varna in 2 speeds was a welcome change. The ease at which it was presented showed the amount of sweating at the net practice !

While most performances of vAtApi I have heard would have only swaras, the vocal duo picked nereval for this kriti. Brief swaras to end the song was well replicated by the violinist. Percussion duo of Manjunath and Vyasa Vittala added lustre to the muktAyis in each round of swaras. Initially, the violin volume was loud and obtrusive. Violinist himself requested the volume to be reduced to focus more on melody and not on decibel competition.

bilahari rAga AlApane was way different and unique as Dr. Nagavalli presented many refreshing sangatis, off beat ones that are not regularly heard in the run-the-mill alapane. kanugONTini was a pleasant surprise. Not so regularly heard kriti, was treated well with swaras at kanugoNTini. Dr. Nagavalli was able to traverse 3 registers with ease. The hard work of years was demonstrated with so much of ease, its difficult to explain in words.

nEnendu vedakududa without any additional ornamentation was juxtaposed in speed to the previous one. They did demonstrate that they can handle even ati viLamba gati with good command and control.

amma ninnu kOrika was a first time for me. After some internet search, I could find the lyrics and BMK's own rendition (LINK). A faster paced than BMK's own version was rendered.

kharaharapriya AlApane was the highlight of the concert. While it was daughter who dominated the alApane with a tOdi grahabEdha, it was mother who dominated in the swara prastara. Apart from small nereval, the swara prastAra delineated various swara patterns that can be demonstrated in kharaharapriya. Being a rAga in a cusp, it also offers grahabEdha opportunities. During swara kalpana, Dr Nagavalli demonstrated grahabEdham into tOdi .. KalyAni.. HarikAmbOdhi.. naTabhairaavi and shankarAbharaNa as she sang full scales shadja to shadja like a ladder yati and traversed 2 full pitches. The audience who recognised it burst into applause.

post main were compositions of Dr. Shatavadhani Ganesh (who was also present in the audience). (Off topic: One has to appreciate his simplicity. Though he was the chief guest of the evening, he was seated among the normal crowd on plastic chairs in the 10 - 15th row and did not want to occupy cozy front rows.)

Tamburi mItidava had a totally different rhythm / pATAntara as compared to run the mill show. It was preceded by a pretty long AlApane (for a tukkuDa). Same was the relevance shown to mOhana composition.

It was indeed an evening to remember for various highlights as listed. Though the same vocalists are empaneled to sing in other sabhas during this season, I may not be able to attend them. Regret the missed opportunity.
at April 13, 2016