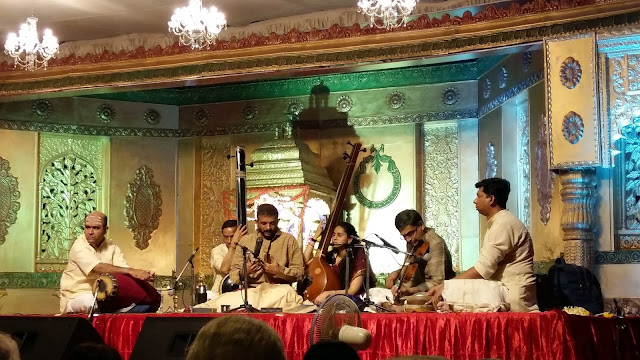 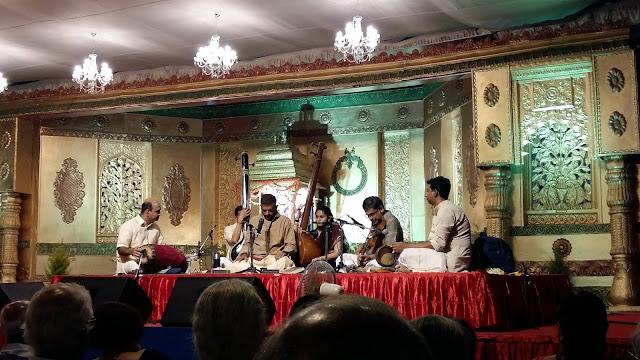 
While I'm still recovering from such a mellifluous concert, I was looking forward for today's concert at SRSM. Though it was a tough choice between Mysore Brothers@ Seshadripuram, IPL at Bangalore and this one, the nearer one to home took the cake of the day as I wanted to avoid the IPL traffic rush leading towards the city centre.

Brilliantly rendered the concert lasted close to 2 hours 50 mins. Power packed with melody and bhAva, TM Krishna and his team extracted every essence possible in kAnaDa, kannaDa and Bhairavi. From the word go he was in form as he unleashed kriti after kriti in vliAsa kAla (a term that i call for delivery that is slower than ati viLamba kAla) soaking in the nectar of pristine music. I walked out the concert with a satisfied feel. This concert goes down the memory lane and reverberates for a long time like Sachin back to back 100s in ODI during 90s in Sharjah.

Here is a brief summary of the events as they unfurled.

Unlike yesterday, traffic leading to SRSM was sparse. Most of us reached venue well before time (including artists). They took the stage, and after a brief Shruti setup, the concert began with a sedentary outline of kAnaDa. The choice was very clear, a composition in praise of rAma. Though TM Krishna is known not to completely be bogged down by such themes of the day, the very first tribute was to lord rAma. Nereval @ akhila sAra magu tAraka nAma,extracted the complete essence of bhakti bhAva, created a perfect imagination of how tyAgarAja would have pleaded rAma - sukhi evvaro ?. As TM Krishna traversed from mandra to tAra, he was demonstrating one of the highest tonal quality, complimented by a higher quality of imagination that took the audience to a literal pilgrimage into tyAgarAja's place of worship. The inaugural heavy piece lasted 25 mins and more.

While the audience were expecting something next, TM Krishna continued to hum kAnaDa for a while before becoming louder on mic. tAna sounded kAnaDa, and he made it clear (humorously) that "that kAnaDa is (not) over". However, this time he dwelled deeper into the rAga through tAna, which transitioned smoothly into the ata tAla varNa. Customarily, aTa tALa varna is not additionally embellished. However, TM Krishna and team took detailed swara prastara at sarasUDa gradually increasing into durita kAla swaras and a small percussion duet followed. It was as smooth as it could be and comparable to what I heard yesterday. Both kAnaDas put together, consumed the first hour of the day.

kannaDa AlApane was beautifully built on vocal and there was just a shadow interludes from the violinist. Without a separate slot for the violinist, TM Krishna started off shrI mAtrubhUtam. While presenting this piece, both TM Krishna and HK Venkatram brought out the mAtru vAtsalya bhAva out of this composition brilliantly. shrI mAtrubhUtam is a gem from m.dIkshitar about lord Shiva "Thayumanavar" and his devi "sugantha kunthalambal" whose temple is in rock fort Tiruchi. There is a story (sthala purANa) that  Lord Shiva came as a nurse to help his devotee rathnavathi, a vysya lady to deliver her baby as there was a heavy flood in river Cauvery. This is explained in charaNam of the song. Each sangati of swarAs traversed mandra sthayi to tAra sthAyi and concluding once again in mandra was presented in a leisurely pace. HK Venkaram continued the same transition into his delivery from Mandra sa  to tAra nI (violin has its limits) to completely replicate TM Krishna's manOdharama. Well dwelt 30 mins of kannaDa.

It was now the turn of Violinist to present his choice of rAga, and he selected not so regularly essayed rAga saraswati manOhari. The delineation of raga and establishing the perfect mood for the song to come up was beautiful. TM Krishna did not respond with his AlApane, but directly slid into the song . This is one of those rAgas that has same name in both tyAgarAja and Dikshitar school. entha vEdukondu O rAghavA was brilliantly presented with nereval. The nereval was done elaborately anchoring around the jIva swarAs of the rAga. The Composition was rendered with a clarity of diction, highlighting the bhAva portrayed by the composer. The song and AlApane chosen by Violinist is also not frequently heard in the concerts nowadays. I am much happy for selection of this song, and not treat the AlApane as a piece by itself in the concert.

Amba kAmAkshi was the highlight of the day, rather POWER PLAY of the evening. Bhairavi needs a majestic treatment. What if the singer and violinist has not delivered an AlApane to begin the composition, it can still be supplemented with a deeper, mellifluous presentation during the song itself. While run the mill presentation can last upto 13 - 15 mins based on the tempo, this grand swarajati was presented in vilAsa kAla for about 29 mins (no Nereval , no swaras and yet 29 mins). At many places, the time appeared eternity. There were many long holding presentations of swaras during charaNa where I felt like time stopped ticking. Though audience applauded in between, his gesture silenced the audience in a flash. Everybody was soaked in the deep nectar of bhairavi. Only TM Krishna can replicate RAHUL DRAVID on stage demonstrating a high level of patience in delivering in such a slow pace, yet rock solid on the tAla. At such points in the concert, even Manoj Shiva and BS Purushottam silenced their instrument, for the whole ambience to enjoy pristine vocal music. It reflected their depth in the musical form and team demonstrated their sadhakam and imagination through such intelligent silences. Even without AlApane, nereval and swara prastAra, I feel this was the main highlight of the evening.

nAyaki Outline happened with a bang, and flourished into nI bhajana gAna followed by elaborate swara prastharas in two kAla and interesting kuraippu was done with audience thunderous applauding. A short tani by both percussionists added to the luster at the fag end of the concert. By now it was already 2.5 hours into the concert. However, it felt like it had just started. Request chits started flowing into dais. However, he honoured a couple of them.

First was ille vaikunTa. Earlier this year, I had heard it from G Ravikiran in Gayana Samaja, and it's a brilliant heavy weight composition by p.dAsa. Many times we feel dAsa padagaLu are light weighted. TM Krishna with his rich tone added more shine into this.

Enna tavam after a brief kApi AlApane was another liesurely rendered piece. Muchukunda- one of nottuswara sAhitya compositions filled the mangalam slot.

The chemistry they share on the stage, the mutual understanding, the healthy space provided by TM Krsishna to others on stage for presenting individual creativity and the unbelievable synchronization are many other factors contributed to this concert's success. I could see camaraderie throughout with even violinist and mridangist applauding TM Krishna on stage.

On the whole an excellent beautiful concert with purely magical rendition. Except for the swap between first 2 items, it aligned to good old concert format that we are all familiar with.

It was indeed an evening of pure bliss.