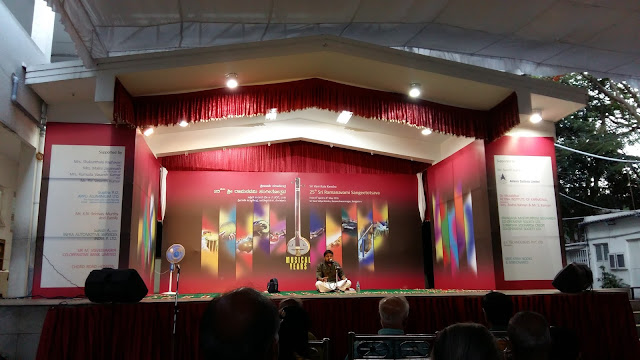 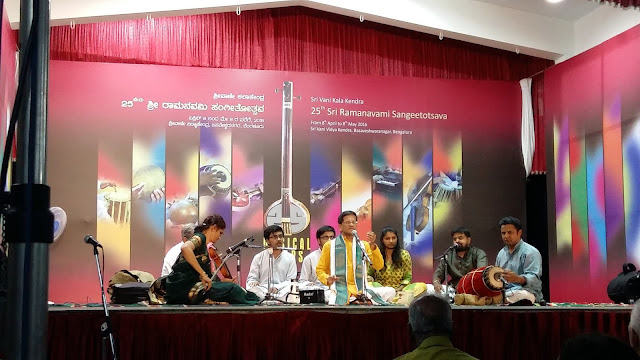 
In a lecdem on the concert paddhati of Sri ARI, Sri KVN had mentioned that ARI would use the varnam to check the felicity of his voice on a given day and then decide what to attempt that day, so as to stay within the bounds of what his voice could deliver THAT day. The crux of this self awareness - the whole process was invisible to the audience! They would go away having heard yet another successful concert from the master. That according to Sri KVN was the greatness of ARI as a concert craftsman.

Sri NSG had that opportunity today. From the opening bars of the tODi varna, it was abundantly clear his voice was not cooperative. Anything above the Madhya sthAyi Panchamam was iffy at best; the tAra sthAyi Shadja was, as the late TRS used to say about some vidwans - "trial and terror" ... Today it was less trial, more of the other! His mandra sthAyi voice was holding up very well enough though, at least in comparison.

The selection of songs showed glimpses of the ARI planning - each a piece NSG could deliver purely on muscle memory. The stock tuLasi daLa, nEnendu Vedukudura, mAkelara vichAramu and kA vA vA were all trotted out.  Good effort was put in to settle down with these.

As if to underline the ARI motif, Pantuvarali made its due appearance as the first AlApane of the day, with Raghuvara Nannu Maravaku to follow.

Where the similarity with ARI ended was his not accepting his temporal limitations of the day - NGS kept attempting notes that were tantalizingly out of reach. The nadir of the concert was the AlApane in mOhana. NSG decided that brow beating his recalcitrant voice into shape was the way to go. The result - some mighty funny phrasing of plain notes, sounding Chinese / Japanese in inspiration - where he tried to hit the correct swarasthanas at least as plain notes. The closest parallel I can think of is Rahul "The Wall" Dravid repeatedly getting bowled, either in the gap between bat and pad or past the outside edge, on his last tour - it was pathetic to see what that once great forward defense had been reduced to.

In the swara prasthara in mOhana rAma, NGS tried some vocalization techniques of the late MMI. Unfortunately, the key to pulling that off is MMI's pitch perfect delivery! Large portions of swara prastAra was dealt in mandra sthAyi.

Charulatha Ramanujam very gamely tried to keep the concert afloat. Her accompaniment was exemplary in trying to supplement for the main artiste without showing him up - a tight rope walk, worthy of Vidwan T N Krishnan in his accompanying heydays.

Arjun Kumar could rename himself has Declibel Kumar. At one point, sound engineer had to ambush the stage to push the mics atleast 6 inches away to bring down the delibel levels of mridanga accompaniment. However, in a counning moment, he pulled it nearer to retain his attrocious decibel levels, other than hogging the LION SHARE of the percussion accompaniment.

Vid. Ranganatha Chakravarthy, was a stark contrast to other ghatam artists whom I have heard. Waited for his turns and played apt. The ssound of which, still persists in my memory after the concert. The sound blended well with violinist when they played their returns.

Many artists have a personal bias against Konnakkol as an accompaniment to vocal music - it distracts. Here, the shruti shuddham of Somashekhara Jois only highlighted the gap in that area even more for the vocalist!

NSG did make a comment at the start of the tani avartanam about a concert being team work; well, the player with the star billing unfortunately was relying on reputation rather than form to deliver.

Pavamana finally arrived with as much anticipation as the shout of "Land ahoy!" from the crow's nest of a ship that has been tossed about in choppy waters for several days having lost its bearings.