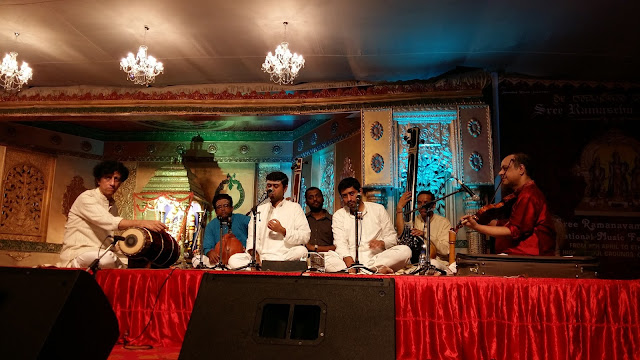 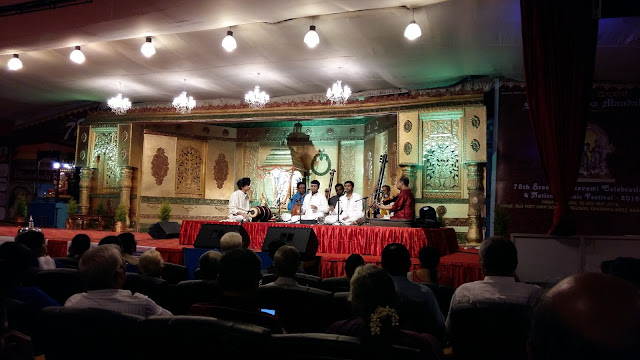 The history of Carnatic music is replete with examples of siblings (some blood siblings, others siblings through the art) who are, not to put too fine a point on it, not exactly equals as performers; it is only with a generous stretch of imagination that you can think them as equally effective individual vocalists. In recent memory, the Malladi brothers are a notable exception to this observation.

The Trichur Bothers are another welcome addition to this set of exceptions. They truly share the load equally on stage. The voices blend beautifully, yet there are always two distinct voices that you can discern. And they use the different timbres to great effect by not always singing the same thing at the same time - at times, one is singing an octave lower than the other to add bass; at another, one is steadfastly holding the tAra sthAyi Shadjam while the other is executing some brighas.

The Bothers presented yet another superb concert at the Sri Rama Seva Mandali on Tuesday. Right from the mic testing stage to the mangalam, there was no sag in the concert. The mic testing was quite interesting in itself - it included singing the Pallavi of Kamalaptakula (Brindavana Saranga) with some sangathis and a round of kalpana swarams to boot! Makes you wonder why they didn't continue the song - this beautiful tyAgarAja Kriti is such a rarely heard piece in comparison to the two Dikshitar masterpieces in the raga.

Anyway, the concert proper started with the reliable Abhogi varNa, sung at a brisk kalapramana to set the pace for the rest of the concert. gauLa outline followed by sRI mahA gaNapathi ravathumAm continued the tempo.

The vilamba / viSranti motif was introduced with mAmava paTTabhirAma - soaked in melody! My only wish is for it to have been even a tad slower, but that is personal taste.

Briskness returned with pantuvarALI and Siva Siva Siva ena rAdA. The first major AlApanE followed this - kApI. Sung with weight and purely in the Carnatic idiom, and no traces of Kaafi (Adiga's filter coffee rather than a Lavazza :). As is their style, the bothers sung the AlApanE together exchanging phrases and building on each other's manOdharmA, egging each other on. Inta saukhya maNine followed with neraval and swara prasthara at swara rAga. Tani Avartana followed. After a brief first round, they dwelled into detailed essay of Adi tAla and later switching the naDai to enhance the tempo to cresendo before ending a short tani.

A Chembai favorite came next in the form of rakShamAm SharaNagatam, more as a filler. The next big AlApanE was to follow - paTdIp arrived, accoutred entirely in its original hindustanI raiments. Everything about the AlApanE - the vocalization purely as akAra, the texture of the plain notes and long mends rather than the more Carnatic kampita gamaka - served as a great counterpoint to the maDI kApI AlApanE before this! It continued onto the tAnam, which though short brought to the concert back to the Carnatic idiom - this was tAnam and not the nom-tom ka AlAp, a Dhrupad speciality. The highlight was the sudden switch into  hindustAni mode. Thier asura sAshaka in hindustAni style was well demonstrated.

The Pallavi was interesting, with two speeds within the structure, but the brothers had left too little time to do justice to the Pallavi in terms of neraval. trikAlam in this Pallavi would probably not have been a great idea anyway; even if executed accurately, musical aesthetics would have been sacrificed at the altar of virtuosity. However, they could have devoted some more time to a proper neraval, particularly given that the only other place where neraval was done was in the kApI Kriti. The rAgamAlikA swaras were good and interesting (very Carnatic rAgAs like varALI and bilaharI interspersed with the desya behAg and sindhu bhairavI for example) without being spectacular.

The tail end pieces were soothing, and a good wind down to the proceedings, particularly the lullaby by Iriyamman Thampi (originally sung for the baby Maharaja Swati Thirunal).

If the filler was a Chembai staple, the maNgaLam was a BMK favorite. Interesting in that these two artistes were mentioned by the vocalists' father a long while back as two of only three male vocalists (the third being KJY) he had accompanied in his long career who never had to clear their throats during a concert. He must be a proud father to be able to add to that list - I did not hear a single cough or throat clearing sound anytime during the concert!

On the accompanying artistes - Chandramauli started off not fully comfortable. He was distinctly scratchy in parts, particularly during certain times in mAmava paTTAbhirAmA. However, kApI acted as a pick-me-up for him (pun intended!) and he was very good thereafter, shining especially in the brief tAnam of paTdIp.

Trichur Mohan has an "unfair" advantage of not just close familiarity with the vocalists' music, but that of actually shaping it. Be as it may, his deep experience coupled with the above ensure that the concert is adequately supported. though the ghata vidwan seemed conspicuous by his silence for most part, he did get to demonstrate his brilliance during tani, matching stroke to stroke with Trichur R Mohan. Personal taste- he could have had a few more decibles into the audio mix.

I came away with mixed feelings. No doubt a very, very good concert - but the heart and mind were not satiated. The brothers' obvious talent promised so much more! While they sang outlines for almost all the rAgAs, I would definitely have wanted to have at least one more detailed alapana - possibly PantuvarALI / maNirangu. And some neraval in the Pallavi, and and one more brief neraval - possibly around navaratna manDapE. But it was not to be. Hope I get to realise this as I attend their concert today at Seshadripuram.

It would be unfair to the concert if I finished with that negative note. It was one of the best in the ramanavami season so far, and I'm sure it will still be one of the best even when the season is over. More power to the brothers!

PS:
1. Inspite of a slightly delayed start, they ensured the mic was set to perfection and there was no tampering throughout.