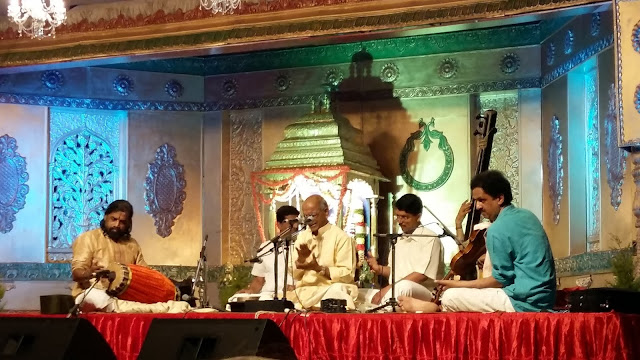 With one of the brothers absent from the scene, one would wonder how the performer will cope with the missing part of the performance. However Vid. Seshachary did deliver the best possible concert to his capabilities.

However the fast paced swaras / krithis were misssing in the whole concert adding to additional melody to the resonating voice.

It was a leisurely presented concert without any hurry.. including the breaks betwen songs.

It was a scholarly presented with detailed alapane and swaras in first speeds. Vid. Mysore Nagaraj was at his melodic best playing like a shadow. Vocalist was in so much of good mood, he did not even know that he handed baton for tani after the latAngi piece. He only spoke about it after the tani. One part of the swara kalpana almost sounded like hamsadhwani as he left out ma and da during that round. Mysore Nagaraj was pretty quick to grasp it and present the same in his violin return.

Usually we get to see second tani for RTP, but in this case, it was once again after the mOhana kriti. Intersting swara patterns were presented here too.  Seshachary, himself being a mridanga vidwan, asked them to directly switch into khaNDa and it was well responded by mridangist.

jAvaLis were presented in leisurely pace too. Overall it was a good concert. with some pristine AlApane of hamsadhwani, latAngi, and mOhana.