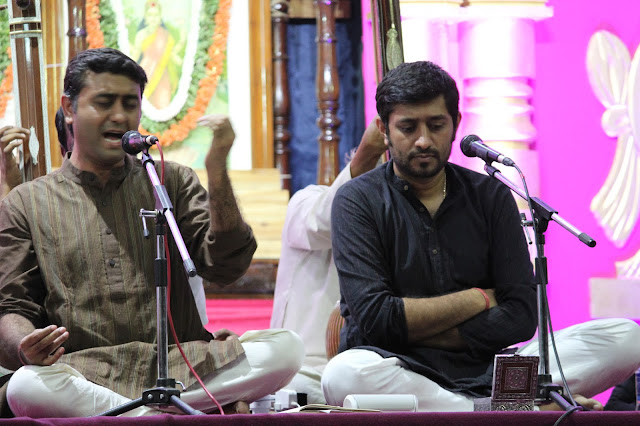 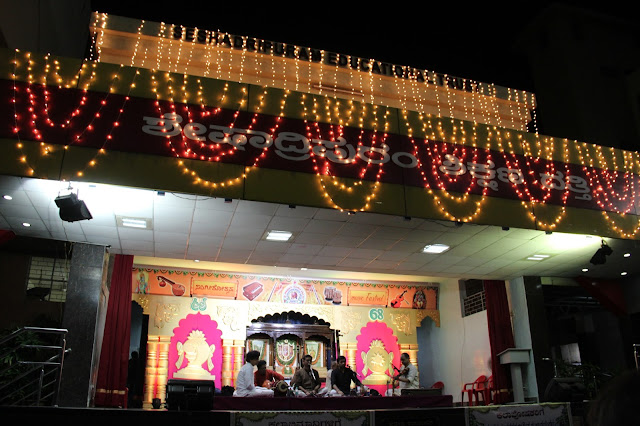 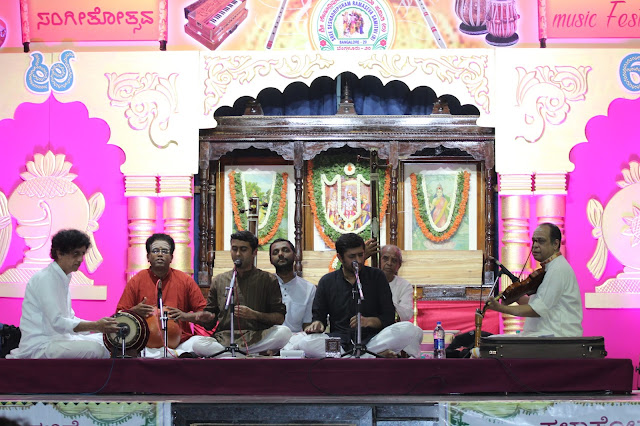 Today was the second consecutive day that I went to hear the Trichur Brothers as part of the Rama Navami festival season. (Yesterday's review is here). It was a repeat performance with the same team as yesterday.

My hopes from yesterday's review were not belied; there were three AlApanEs and two neravals today. Their practice of singing / humming a brief outline of the rAgA for each piece was of course still continued.

Yet again, Kamalaptakula made an entry as part of the mic testing! I really must urge the brothers to sing this song fully at the next available opportunity in Bangalore.

Nannu viDachi of tyAgarAja was rendered next, without much manOdharmA embellishments, letting the composition's beauty speak for itself.

amritavaShinI was the first AlApanE of the day, sung with the requisite level of aggression. dIkshitar's AnandAmritakarShinI was an apt choice; given the heat wave that Bangalore has been reeling under, some rain showers would be really welcome! (Read an interesting blog from my friend on this particular rAga here) My only quibble with this piece was that the swara prasthAra stretched beyond a limit of satiation, and the tisra naDai prasthAra ending at harAdi pUjitE was a bit contrived and not very elegant.

lakShmikAntA bArO of purandaradAsa was next up, as a filler. (Need confirmation from fellow rasikAs on this raga; had a lot of shades of ShuddhaKalyAn - think Rasika Balma of Lata Mageshkar - fleeting touches of Ni and Ma in the avarOhaNa, but not strong enough to call it mOhanakalyANI)

The main for the day was madhyamAvati and the grand rAmA kathA sudhA. The AlApanE was detailed, but the normally conservative madhyamAvatI mAmI invited to the party her northern alter egos of the sArang family; both madhmAd and brindAvanI sArangs peeped in to have a dekko at the audience :)

Neraval was done at bhAmA maNI jAnaki saumitrI - for me, one of the most musically evocative neraval spots across rAgAs and kritIs. To give the neraval it's due airtime, the brothers decided to dispense with kalpanA swarAs for this piece. Mixed reaction to that - given the disproportionate allocation to swara prasthArA by the artists usually, this was a wise choice in the interest of time management. However, this particular spot is so replete with possibilities that you autonomically missed "pa-ni-ma bhAmA"! As an aside, the late Lalgudi Jayaram talked about GNB's penchant for poruttam in swara prasthArA and how he (Lalgudi, I.e.) was introduced to this concept for the first time by GNB using exactly this example.

A brief and succinct tani followed, with both the percussionists judiciously balancing percussive virtuosity with sunAdam. Not overdone, but not so brief as to be unfair either.

For the second day running, a Hindustani rAgA was taken up for RTP - today it was behAg. However, given the much greater body of Carnatic kalpita sangItam available in behAg when compared to paTdIp, it was not surprising to see behAg garnished primarily with curry leaves rather than kasoori methi. This was much more rooted in the Carnatic idiom than the paTdIp AlApanE, be it the vocalization techniques used, the gamakAs employed or even the greater use of prati-madhyamA than is the norm in than the Hindustani original. And the neraval was done far more elaborately today - in fact, rAgamAlikA neraval was done before the kalpanA swarAs - the rAgamAlikA section was a long chain of short bursts of different rAgAs by the three melodic artistes.

The concert finished with rAmachandrAya mangaLam. Small point for the brothers to consider - in the string of slokas they render at the end, there is an Anjaneya sloka (asAdhya sAdhaka svAmin) which they render as the penultimate one, before closing with Shriyat kAntAya kalyANa. The norm in pUja vidhi is to finish with a prayer to AnjanEyA - they may consider swapping the order of these two slokas.

Once again a very good concert, but if I were forced to rank, I would say the Fort High School one was just that bit better!

Comparison goes further:
1. during paTdip RTP,
ended paTdIp with Pa Ma Ga then switched to varALi then using Ga Ma switched over to bEhAg.
ni sa da in varALi.. and then Pa Pa onwards into sindhubhairavi

Switch from sindhubhairavi a hindustani raga to pure CM raga bilahari was a brilliant move. We could appreciate the entire mood change, inspite of not being sung it leisurely. Violinist played a kadanakutUhala before elaborating bilahari. Bilahari rAgamALika swaras were 100% ra ra venugOpala swaras.

This kind of flourish was not evident in today's concert. Too many rAgas in short span delivery. I was lost in the flood