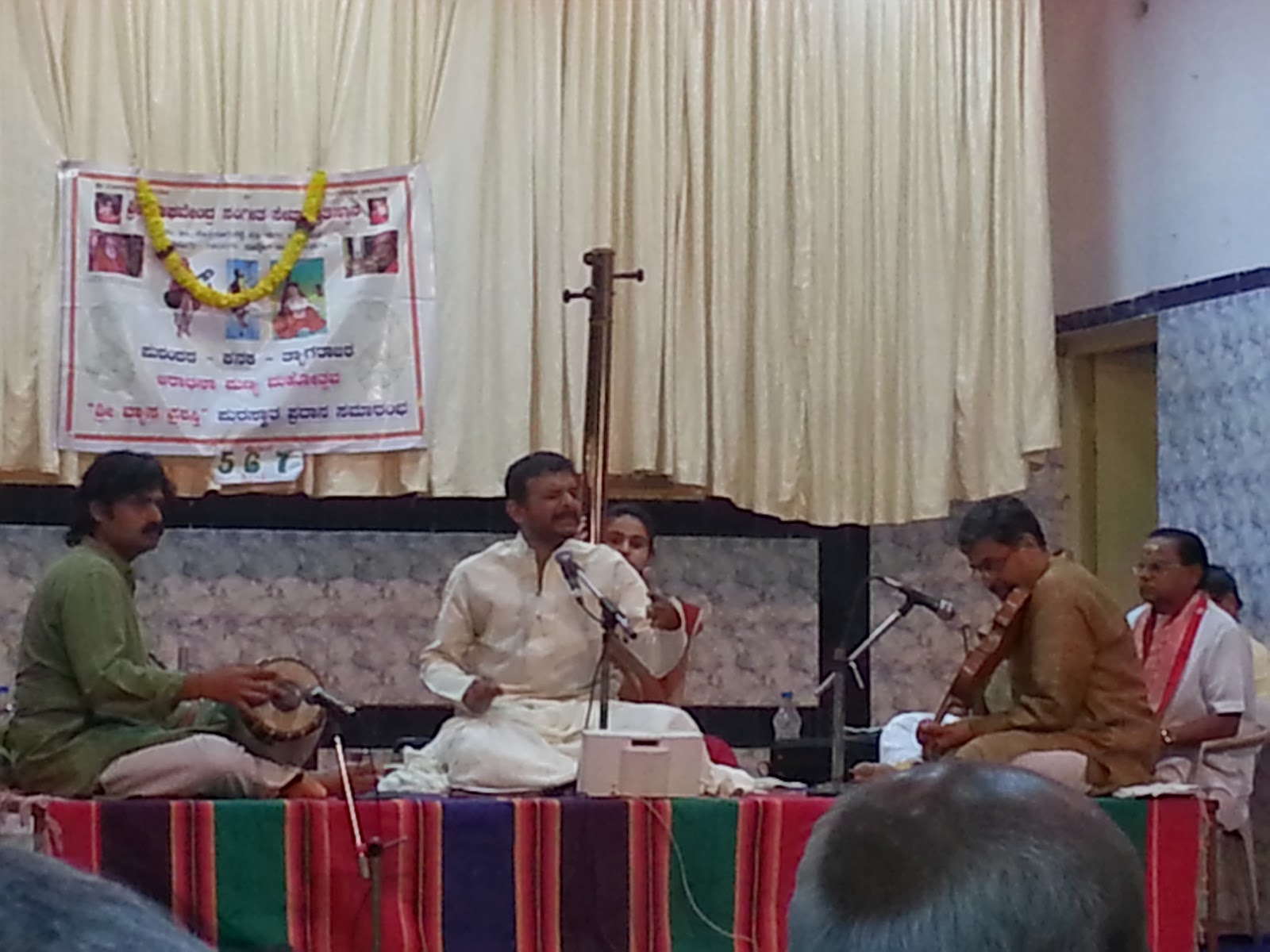 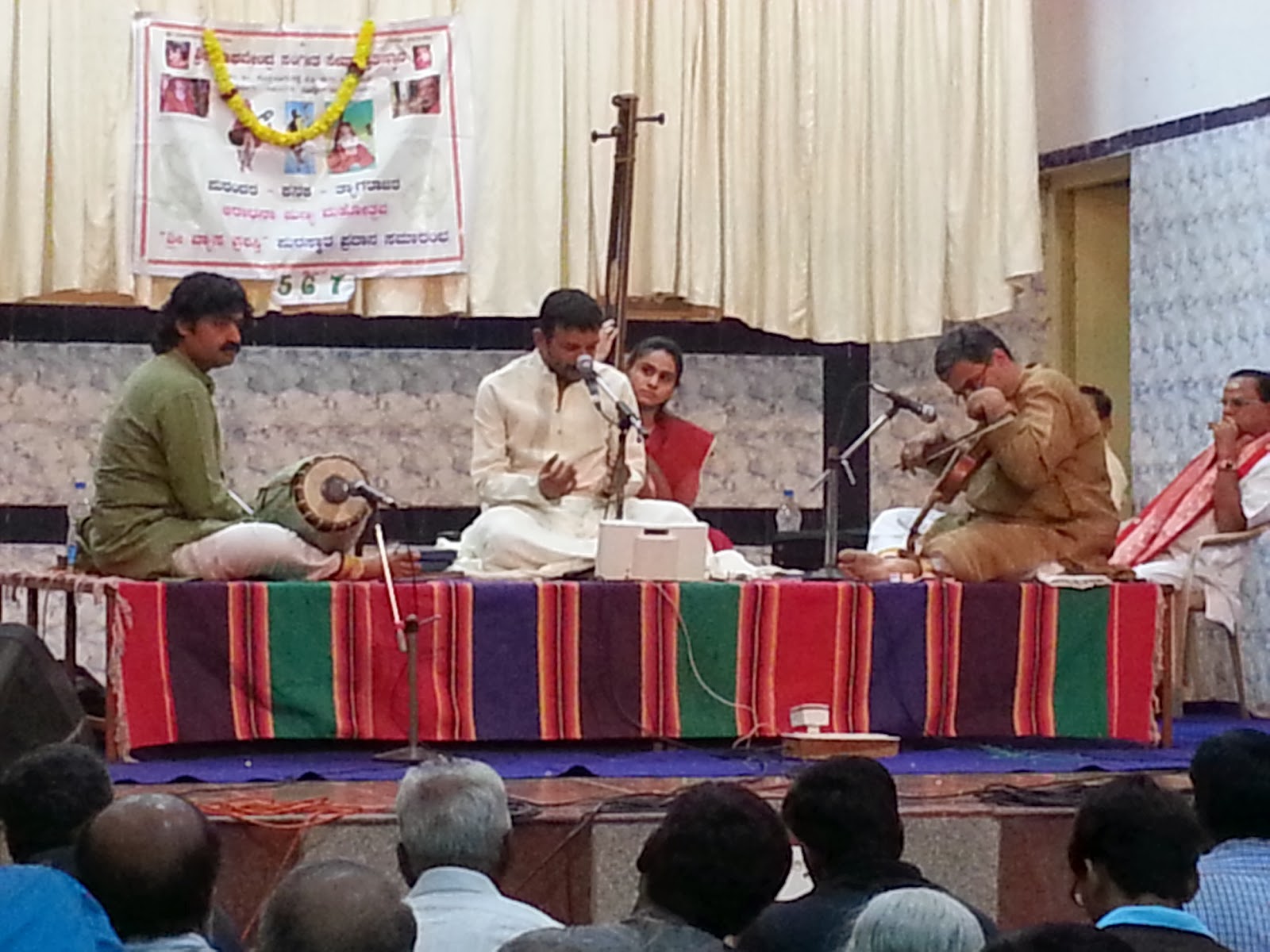 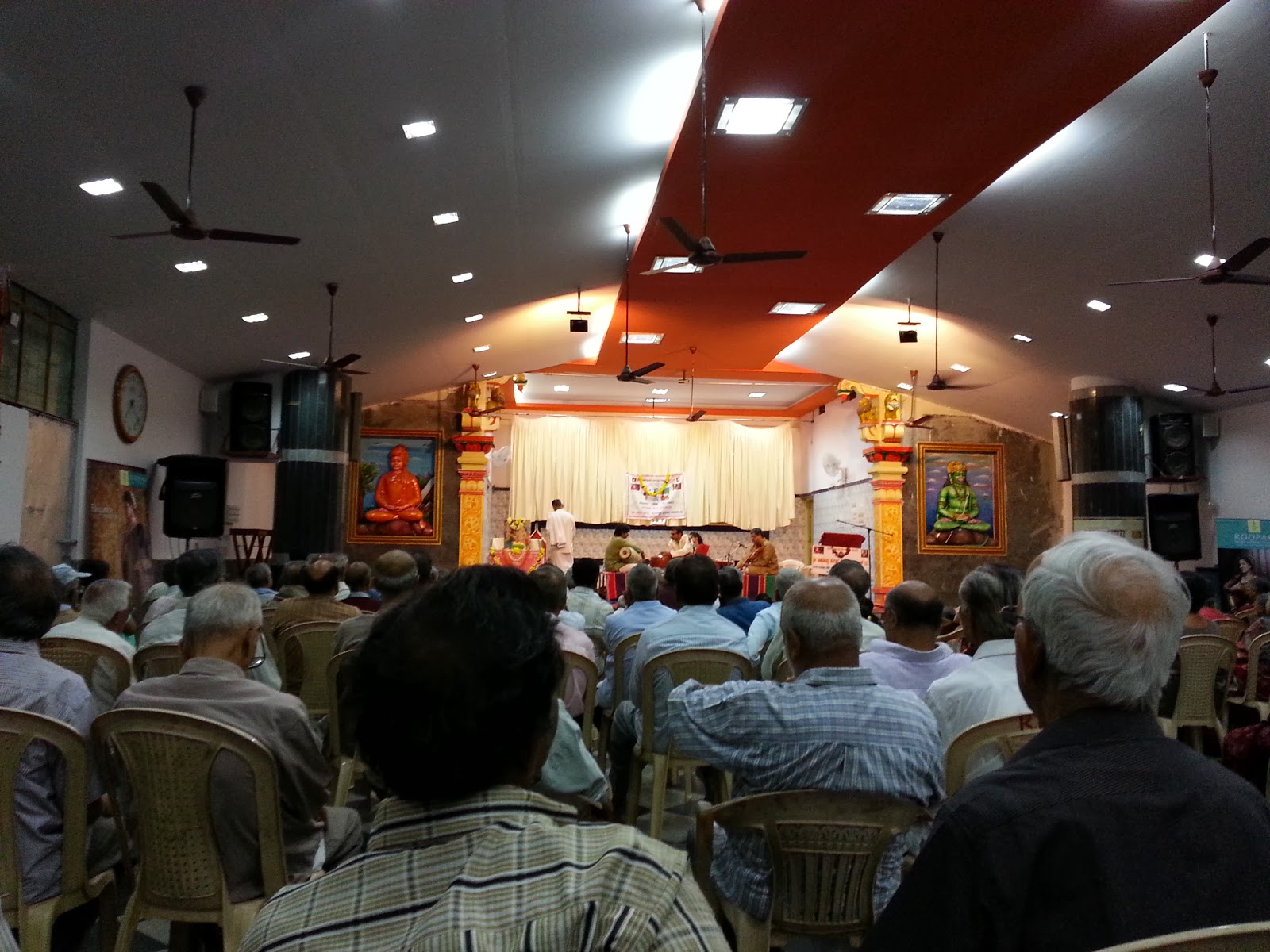 Panaromic view of the hall

This traditional concert of TMK will stay if not eternally atleast for some days in our heart and soul.. ,(not to his usual format) with a brisk  sAvEri  as opening number then another brisk khamAs, followed by meditative, dEva gAndhAri as sub main,then mAyAmALavagauLa as main with ragamalika sloka of mahan "appayya dikshitar" (the sloka given in the begining of this review) in ragas mukhAri, kApi and yamuna kalyANi, closing the concert with good dEsh, here only we can see bit vishamakara krishna after giving a shade of dEsh and encouraged his  violinist to present the rest of  the AlApana (what a short  and sweet dESh!!!!)  and concluded with a dEvarnAma.

TMK presentation of dEvarnAma should be an example  for the other vidhvAns and vidUshis also to show them there are other format of presenting a dEvarnAma.

Is this not a traditional concert format which purist are arguing TMK has abandanded? But this rAgi guDDa concert has proved TMK can present a concert to the likes of purists also.
KhamAs AlApana was short and followed by "sujana jIvana " of saint tyAgarAja. neraval and swara prastAra at charanam line "cAru nEtra shrI kaLAtra " was divine one could really visualise the beautiful  eyes of lord rAma as described by saint as "cAru nEtra"

kshIra sAgara shayana a simple melting song with no extra pleading in the form of neraval at  "tAraka rAma" etc. the dEvagAndhAri AlApana was also with more bhAva created the mood for the kIrtana continued in mAyAmAlava gauLa AlApana and kIrtana that followed.

One could get a sowkhyam feeling and made us  to soak in the rAga bhAva and nadam TMK and his team created. Swara prastAra was in both viLamba kAla and also in madhyama kAla. Some of the mandra stAyi swaras in madhyama kAla by TMK was brilliant. He never moved out of the sowkhyam feeling even in second kAla swaras.
In this concert as well as the RLKM concert, the concerts were raised to high level not only by TMK but also by accompanist. The Akkarai elder sibling who used to give jet speed vocal concert  (and accompanies jet speed vocalists too) has changed her style totally to synchronize TMK as in RLKM concert.

So this rasika is wishing one of RaGa  sisters should accompany TMK in future, yes it will be a concert made for each other.

On your left is the compassionate daughter of the snow mountains and you have applied the cool sandal all over your body.

How, O Lord of the Golden Cosmic Hall, are you able to bear such cold atmosphere?

You are welcome to stay eternally in my heart which is hot due to the sins I commit.
at February 08, 2014