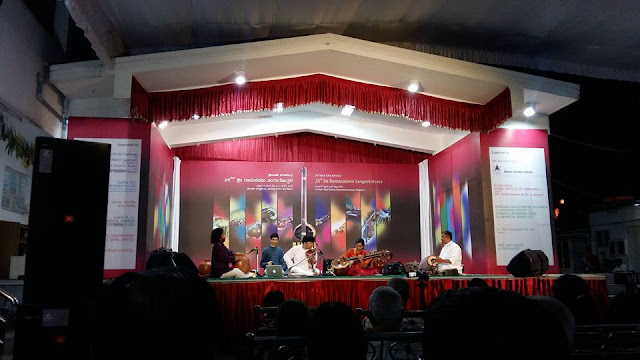 
Power packed concert in the season of T20s. The concert was in full speed from the very first note.

KalyANi varna was directly played in second speed. During the chittaswaras, both fiddling  monk and vaiNika took turns to play the swaras independently. It was almost like both hands were dancing to

kAnaDa was the choice for submain of the evening. Was expecting sukhi evvaro... but it turned out to be srI nArada. The very first bow of the AlApane indicated it would kAnaDa. Such was the precision !!

Post the quick hindOLa filler, came the elaborate rAga tAna in nATTakuranji. Very expansive essay of the rAga with each instrumentalists taking turns to decorate. The final tAna by Kumaresh received thunderous applause.

There was no announcement of the pallavi line, nor were any rAgamAlika swaras at the end. It was a pure and pristine nATTakuranji all through the 40 minutes of RTP.

Tani was another highlight of the concert. The newly setup pendal resonated many times during the ghumki playing by both percussionists.

A composition in Sindhubhairavi and further medley in madhyamAvati (harivarAsanam, nagumOmu, bhAgyAdalakshmi bAramma) indicated that they are going to end the concert 15 mins early !!

A small note of dissappointment.. a 3 hour concert slot was used only for 2 hrs ! the junior concert earlier ended whopping 30 mins late !

However, everthing that was presented in 2 hrs was worth the hadrship of travelling 32 kms to the concert in hot summer evening of Bangalore when it was 40 Degree Celsius.