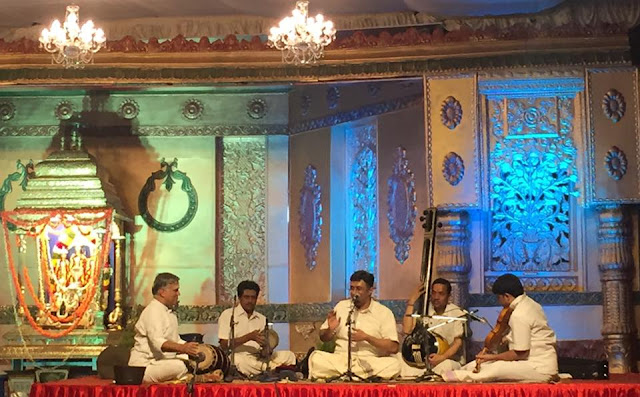 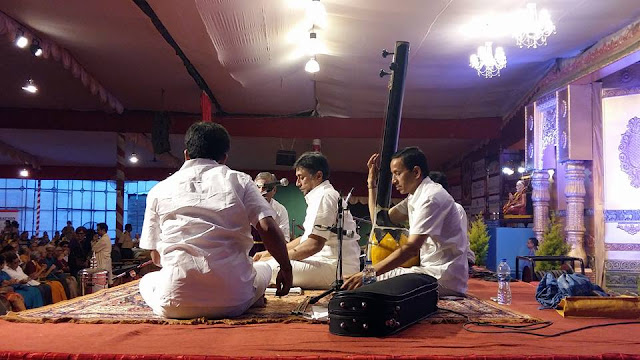 Being the first concert after a month long sabbatical, I was all energetic. Cut short my Ugadi celebrations at my hometown, rushed back to listen to Sanjay as I knew the evening would be a blockbuster.

At the end, the concert represents a subtle theme. Rama praised through the eyes of his relationships- jAnaki, his subjects and lord Shiva. Lucky are those who lived to see rAma in their mortal form. Thanks to tyAgarAja for such gems which helps us to relive those days through his music. The main part of the concert was completely consumed by tyAgarAja compositions. Who else could have done justice in praise of lord rAma. Kudos to Sanjay for presenting in this theme.

And this is a firm footed assurance that on any evening Sanjay can deliver a 100 / 100 concert. On a very hot summer evening, he was still energetic to run another show of 3 hrs at the end of this concert. Only audience had drained out their energy through the evening.

The sound engineer did a fantastic job of producing demon less sound throughout the evening. The backdrop of the stage has a fresh look of embossed carvings inspired by Mysore royalty. Kudos to the team that has organized this festival. With such glitch free 2 continuous days, I’m sure RSM is the place to invest the evenings of next 29 days.
at April 09, 2016