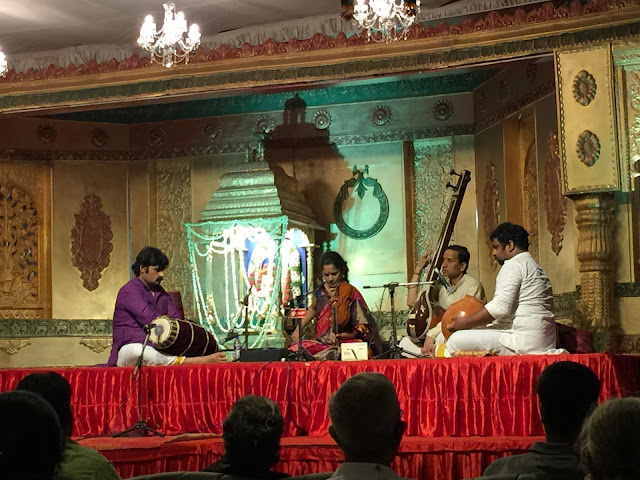 The Oxford English Dictionary defines the word "Serendipity" as "The occurrence and development of events by chance in a happy or beneficial way"; of course there are more colourful but earthy definitions involving needles, haystacks and sons / daughters of the soil. A more colloquial adage goes "if life gives you lemons, make lemonade!"

Be as it may, it was indeed an unexpected but pleasant turn of events at the Fort High School. I went there in anticipation of listening to one of the most sensitive instrumentalists we have on the concert circuit, Smt Jayanthi Kumaresh; having recently heard a recording of her late guru S Balachandar's recent lec-dem on tanam (delivered at the Indian Fine Arts Society circa 1985), I was going full of enthusiasm with an intent to request her to play tAnam in dEvagAndhArI. But it was not to be; on reaching the venue (I had missed a Facebook update by SRSM earlier today- and hence a surprisingly sparse crowd invited me at the venue. The other reason could be that the junior concerts are done and dusted, the junior concert crowd was certainly missing), I got to know that the vidUShI was indisposed and would not be performing today.

This is where the serendipity kicked in - her slated violin accompanist, Kum Akkarai Subhalakshmi (AS), stepped in to perform a solo concert, and a magnificent stepping did she do! Of course, AS is a very competent solo artiste in her own right, so this was not like a night watchman in test cricket coming in to protect more established batsman against the fading light towards the end of a day's play and going on to score a century (that btw is concept I have never quite understood - how is sending a batsman with known weaker technique in a potential minefield of a situation good strategy? But this is not the time and place for THAT discussion, so I will drop it here!)

She started of with swAti mahArAjA's grand aTa tALa varNam in kAmbhOjI (sarasIjanAbha), an straightway established her layA credentials, rendering the varNam in four speeds (I think the four speeds are as follows - Pallavi + Anupallavi + Muktayi Swarams first in 6 avartanas of 2 Kalai Ata, then 4 avartanas, then over 3 avaratanas and finally in 2 avartanas. NOT SURE - this is the only way I can make sense of it, as she has played only one cycle in each speed, so the next speed has to start in the standard eduppu. Could be completely off the mark here). The varNam was preceded by a short but evocative outline of the rAgA.

Next up was svAminAtha paripAlayA in nATa. Only recently, I was discussing the vivAdi nature of nATa with a group on friends and we were debating if the rAgA is really representative of a vivAdi set, unlike say chalanATa. However, AS's opening bars demonstrated the musical tension between the ShadShrutI riShabha and the antara gAndhAra beautifully, neatly establishing its vivAdi nature. A brisk round of kalapanA swarAs were rendered for the pallavI.

mOhana was taken up a the first AlApanE of the day. A bit of hyperbole, but there were flashes of the great Lalgudi Jayaraman's mOhanam in some of the phrasing (both jAru and sthAyis). Of course, with the great man, you heard mOhana even during fairly long pauses in the AlApanE - that level is yet to be attained by the young lady; she just needs to hone the art of pausing with effect. rAmA ninnu namminA was the kriti chosen, played at a jaunty madhyamA kAla. The kriti was rendered without neraval, and kalpanA swarAs were rendered for the pallavI. There was a brief exchange of ideas between her and the percussionists in the kuraippu. As an aside, I have usually heard swaraprasthAra for this kritI either at the pallavi, like today, or at the anupallavI (pAmara jana). I have always wondered why no one renders the swarAs at "daSharatha", in the first line of the charaNA - as a bathroom singer / hummer, it seems to be a spot replete with possibility, particularly given the swarAksharA facility available there. Maybe its just that I have not come across it, but is reasonably common!

Then came another surprise. After playing maNirangu AlApanE (which has been fairly common in this season, so that was not the surprise), she started playing the kritI but at some point decided that she would rather sing it rather than play it! She is a competent, concert level vocalist so it was not some whimsical indulgence on her part. Maybe she felt that Dikshitar's beautiful sAhityA needed to expressed as such, and not just as notes. It was a good touch at the end.

A very brisk brOva bhAramA followed (with flashes of MSG school during swaras), with the charaNa played at an even faster pace than the pallavi & anupallavi, with some rapid fire chiTTaswarAs and also kalpanA swarAs for the pallavI.

The main piece of the day was an elaborate RTP in ShaNmukhaprIyA. She spent a good amount of time exploring the beauty of the rAgA in the pUrvangA and the mandra sthAyI. ShaNmukhaprIyA is the quintessential nAgaswara rAgA, and the nature of that instrument is such that most people assume that this rAgA shines only in the passages around the niShAda, tArA sthAyi ShaDja and riShabha, which is so not the case. AS of course went to play in that zone too, but only after exploring the meditative regions below. The closing movements of the AlApanE were again in the mandra sthAyI and the quality and clarity of sound production was simply superlative in the durita passages in the lower octave.

Particular mention needs to be made of the tAnam playing. The clarity of bowing in practically enunciating the staccato syllables of "anatam Anantam" was of a praiseworthy. I have heard experts say that tAnam should not be just a faster exposition of the AlApanE, as is so often the case with so many instrumentalists - it has a character of its own and should be treated as such. AS's tAnam did not suffer from the problem - at not point did you feel that this was merely faster AlApanE with some cut bowing. Maybe it is her tutelage under a string instrumentalist of Chitravina Ravikiran's caliber, maybe it is her solid grounding under her own father, maybe it is inborn - or all of the above!

Till now, she had been following Ravikiran's practice of announcing the details of the compositions after the rendition (as CRK usually says - "to give the guessers a chance"). However, for whatever reason she chose to deviate from this practice for the pallavI. Most instrumentalists usually announce the sAhityA of the pallavI upfront, and a significant number of them usually sing a couple of Avartanas of the pallavI to establish the structure for the audience and the accompanists. Particularly given her vocal skills, not singing the pallavI was particularly vexing. The pallavI had a distinct khanDa gait to it; I couldn't count the aksharAs confidently enough though. The pallavI went something like this "SaRi, RiGa, GaMa, MaPa, PaDha, DhaNi, RiSa", soon morphing to "SaRiGaMaGa, RiGaMaPaMa, GaMaPaDhaPa, MaPaDhaNiDha, PaDhaNiSaNi, DhaNiSaRiSa, RiSa" - I know its not very illustrative, but its the best I can do!

The neraval was not detailed much before she moved onto the kalpanA swarAs, and did a rAgamAlika in behAg, hamsAnandI and dEsh, closing by playing them back in reverse order. This was followed by the tanI.

Tumkur Ravishankar's (who also received the lemon of the day as he was a replacement artist for Vid. Arjun Kumar) mastery revealed with controlled playing to the kalapramana with highly imaginative korvais all through and tani provided an opportunity to show his vidwath. Immensely talented and experienced percussionist, Trichy Krishna played in line with him also with his own imagination and creativity in delivering a perfectly paired tani.

Sound System worked perfectly well, though the shruti levels were a tad high at the beginning of the concert.

Overall, a very refreshing lemonade for the scorching summer heat, given the lemon handed out by the originally billed artiste's indisposition. My only request to AS would be to add a bit more viShrAnti to her playing - some chAUka pieces, some more pauses particularly in the AlApanE, more focus on AlApanE and neraval. She has all the ingredients to be an all time great in the art (clarity of sound, clean bowing, abundant imagination, solid gAyakI footing) but some patience would go a long way in getting her there!


AS belongs to a niche category of violinists who deliver masterly 3 hour vocal concerts as the situation demands. AS - in this case could have pulled out a one-off voco-violin concert (a Deja Vu that I felt when she took the stage, and later once again when she sang maNirangu) as she had all freedom to experiment in front of the sparse (read it as niche) crowd. However, she may have saved it for another day and another audience.


Anecdote:
During the VOT, it was mentioned that in the history of SRSM, similar replacement concerts (by a violinist) have occurred. A noteworthy coincidence was
1. Mysore T Choudaiah taking place of Mysore Vasudevachar (when his voice was not in shape to take the stage)
2. Dr. Mysore Manjunath taking the place of T R Mahalingam, when he did not turn up for concert that fine day
3. Yesterday..Akkarai Subhalakshmi taking place of Jayanthi Kumaresh.

In all the 3 cases, the Violinist have excelled par excellence to make rasikas remember those evenings for long-long time.


While many sabhas don't schedule a violinist accompaniment for a Veena Concert, this was a deja Vu that worked in favour of the Sabha.
at May 02, 2016