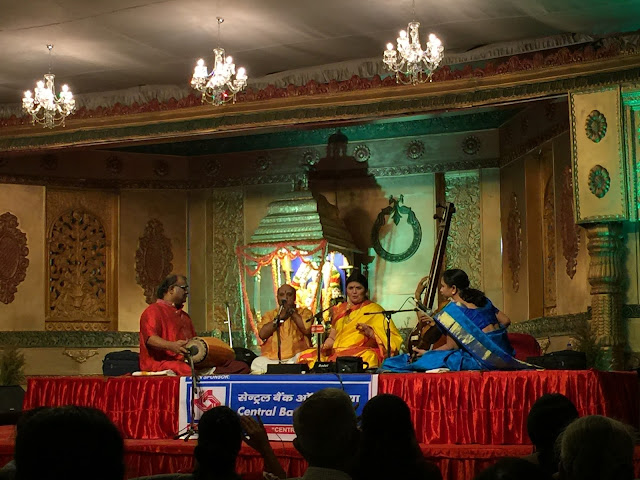 Date: Sometime in Sept 2012
Opponent : New Zeland
A star batsman walks into the crowd carrying country's expectations and scored 34 off 26 balls in a T20 Match. Later that year, he ended up being the highest wicket taker for India in the tournament though he could not match up to the expectations with his bat. The star player was none other than Yuvraj Singh who returned to International cricket after almost a year+ break.

Today seemed to be a similar day at SRSM. The main artist of the evening, battling her own challenges took on the stage after a hiatus, yet delivered a stellar performance.

With a brief outline of kAnaDa, MSS started off the brisk-paced Adi tALa varna. Today being tyAgarAjA's gregorian birthday, I was expecting all tyAgarAja concert, however, this was a fine twist to bring in a composition of a vAggEyakAra of a similar name. Since the initiation itself was brisk, the whole composition was rendered in same pace.  Though a bit shaky in the beginning, it ended well

A brief outline of nAgaswarAvaLi paved way for another fast paced performance of garuDa gamana. She refrained from presenting her favourite Sri shankara guruvaram. The swaras were interspersed intelligently directly in the second speed.

The birthday treat came in form of vIravasantha composition. Though the current generation artists present this in brisk pace, today's presentation had all the bhakti bhAva aptly gelled with the slow pace presentation. Though it lasted for about 5 minutes, this subtle difference made it a rendition to remember.

First pratimadhyama came in form of pantuvarALi AlApane followed by nAradamuni. Though this was the first ANS krithi of the concert, it took full 30 mins to be treated as the sub-main of the concert for me to realise at the end of the concert. Kriti was well rendered and the swarAs which followed were too good mostly in the same pace as that of the krithi, except for the conclusion.

A series of fillers occupied some prime time slots of the concert. PaTTi viDuvaradu in manjari was presented in viLamba kAla, another deviation from the fast paced current generation.

A detailed AlApane in between the fillers for hamsavinOdini was backed up with a JCW composition. No embellishments through swaras / nereval. One of the rare krithis to be presented today. My memory goes back to a couple of years, when Abhishek Raghuram had presented this (source: My concert notes). Hardly remember the rAga traces as it was my initial days into listening. However, this rAga has a unique resemblance to ravichandrika. Any small deviation can tread into ravichandrika zone. However, today it was blissfully controlled. Had a kind of feeling that it could be ravichandrika.. but it is not (as it had something more). As stated in the LINK, "The ragam is quite similar to the ragam Ravichandrika though a genius could discern the difference."

The dhEnuka kriti had a few nice swaras was rendered. It was a kind of wake-up call for NM as she was just bowing only shadja at some points of the krithi..

Vara rAga laya was brisk and resembled GNB's original rendition, probably the same way he wanted it to be rendered by other fellow artists.

Audience request for a bilahari composition was honoured. What a masterly acceptance. There was a momentary thought (recapitulation) and outflowed the rendition. No hesitation what so ever in accepting the challenge.

The main madhyamAvati AlApane was rendered with a lot of classism and showing essential parts of the rAga. The kriti through each sangati kept reminding one of the renditions of old masters. The neraval and swarAs at "bhAma maNi" were very good, with neraval done in 2 kAla. The swara patterns were measured and good. The volley of swaras was very rich in manodharma which was aptly reproduced even by the percussion team.

Vid. HSS demonstrated his skills in playing the kriti on the mridanga. He played with such anticipation (many bhale-bhale moments and exchange of broad smiles through the concert) and was very good even while accompanying the neraval and swarAs. His tani was outstanding as solo and with Vid BR during the final paired conclusion. There were demonstration of some new stroking and rubbing techniques on mridanga, while BR did not stop showing his blowing (without plucking the morsing) techniques to create different sound effects. It was received with an instant appluase by the audience.

At the end, it was a concert full of learning experience (1. New rAga for the audience- unlike treading the safe waters using tried and tested ones, 2.Change of speed for the fast paced generation etc). MSS repertoire is amazing which was evident in today's concert. The execution, stage presence and mannerisms demonstrated by the team was a lesson worthy of emulation.

Not a dull moment in the 3 hr 15 min recital, inspite of all the challenges off stage. I would like to end this experience report with a philosophical quote: "our talent and your intelligence don’t play nearly as big of a role as you might think. What makes a bigger impact than talent or intelligence? It’s “mental toughness.” "
at May 04, 2016