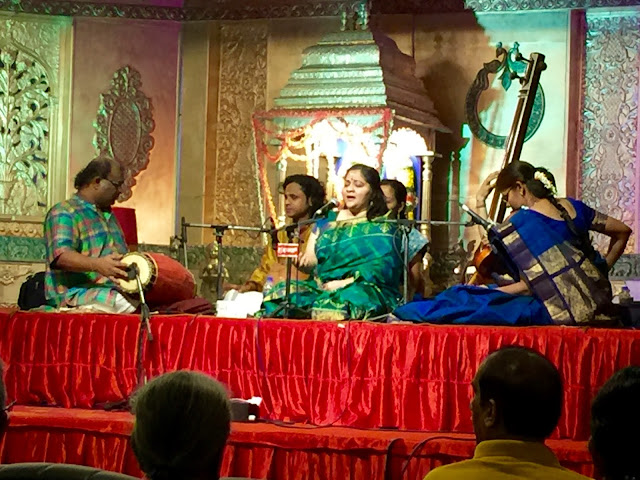 Picture Courtesy: VS (Rasika friend of mine)

Light showers around 14.30 hrs in Bangalore already provided the signs of what is going to be in store for the evening. With Vid. Sowmya (SS henceforth) landing in Bangalore, had carried good omen of a peace and prosperity in Bangalore through the showers, which continued in patches throughout the city through the night.

Devoid from my routine which I had to urgently attend to, I reached venue late. Parking was full at the sabha indicating the support that had already gathered inside the pendAl. naLinakAnti was concluding with a flare of short tani as a took my seat amidst the beginning of downpour at sabha area. The concert had a brief interruption to accommodate the artists (wet pitch and players unable to play - in cricket parlance)

She had already served a treat of KalyANi, madhyamAvati, dhanyAsi and naLinakAnti to the delight of the almost full house audience (from the beginning moments of the concert). As I heard from my friend who luckily had a seat empty next to him, varNa was more a warm-up piece rendered leisurely. madhyamAvati had long swarAs which occupied most of the time of the 14 minutes rendition, which was followed up by an explanation of the krithi presented. My rasika friend felt it was hurried. however, the temp if she had sung in the tempo used in demo it could have been fantastic. The beginning notes tA ra na na during AlApane had crystal clear dhanyAsi chAya. Her lower notes were very clear.

Back to the live show, the nAyaki AlApane was a sedate presentation, contradicting the performance till then. It resembled poise and composure of Rahul Dravid in the middle overs. With a small introduction to the krithi, she presented it without any embellishments.

Vande sadA padmanAbham was a perfect filler to take off into the main section of the concert. It was very well rendered.

With an eclectic mix of 5 composers till then, she dwelled deep into a long shaNmukhapriya AlApane. There was no clue till the completion of another mind blowing response from CR what was in store for us. Was the voice/ breath not co-operating  to sing higher octaves - I felt so?. But this did not deter her from exploring the bhAva of the rAga in the mid and lower octaves. Elaborate lower octave sanchArAs, vintage and salient pidis of shaNmukhapriyA interpolated between intricate freewheeling passages were the hallmark of the presentation. It was indeed breathtaking and I was left guessing what possible song there could be with rAma as the central figure.

After a brief chat with violinist (lip reading indicated - Pallavi pAdlAma ??) she burst into short cycles of tAna and an equally energetic response from CR delighted the audience. Each cycle of tAna by both the artists.

Pallavi presentation was interesting. With 1.5 atIta eDupu, she dwelled elaborating the Pallavi line: " srI rAma rAgahuvara ... sa dA mA pA hi" nice aligned to swarAkshara in the second half. Elaborate treatment in 3 kAlAs, while the eDupu aligned to samam was an interesting take. Tani occupied a leisurely slot (as though you are chasing at a run rate of 3 or 4 RPO). As the tani came to a conclusion, Vid SS took off to sing a few rAgamAlikAs. Tani once again at the end of rAgamAlika ended the show on a high note.

A detailed VOT followed, including thanking the team of organisers who are running the show behind the scenes. The audience who stayed till then did not miss to applaud their contribution. I feel missing out the SOUND ENGINEER who has been doing a great job this year was a big let down from the organisers.

Other tail lamps (highlights) were a sedate rEvati ("bAgilanu teredu" of kanaka dAsa - emulating PB Srinivas who sung this song for Dr. Rajkumar movie in name of the composer - Bhakta Kanakadasa) and brindaAvana sAranga (" " of swAti thirunAl).

Excellent concert, the lady is in fine form ! And boy... she sure did not disappoint!

I came in dry, challenging varuNa to be faster than me to reach the venue, but got washed away with the pristine music of the evening. An unconventional song list (devoid of her staple list) with a couple of  unfamiliar items (at least to me), yet presented in a manner that appealed to lay rasikAs and connoisseurs alike.  All south Indian crowd (not justTamill Tamil afficionados who had added to the audience strength to what I saw last 2 days) would be extremely pleased with the song selection of most south Indian languages, and to top it, conversed with audience in tamizh. The crowd was very interactive during the key moments in the concerts.

As I rode back in cool breeze in empty roads of Bangalore (Believe me - yes it was empty!), shaNmukhapriyA tAna still lingered in my ears. I only regret, I missed her concert at sEshAdripuram due to other personal engagements that I could not withdraw from.

As the season comes to an end in a couple of days (I plan to attend: Mahati, ChitravINa ravikiran and Visaka Hari) the toughts are lining op for a season review. This concert has entries to be remembered in the 'season's best' sweepstakes.
at May 06, 2016