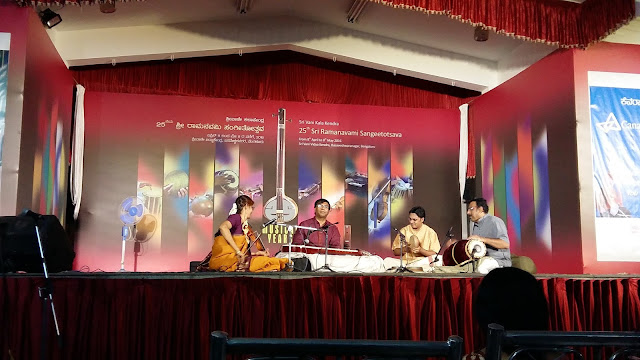 It was a no brainer as I had to make a decision on attending one of the Brinda/ Mukta school prodigies. When more pristine music v/s long speech is the option on hand, ChitravINA ravikiran got my vote for attendance.

Dark clouds over Bangalore did not deter me / the artists to reach the venue on time. The concert started after a brief introduction to the artists at 19.00 hrs. I was praying atleast today, the concert should start on the scheduled time, the prayer which was not answered too !

Introducing the composition, the concert started with a beautiful sketch of vasantha and a varna set the tone for the rest of the concert to unfold. A very rarely heard composition on the concert stage, my memory goes back to Malladi Bros concert in 2014 / CNR concert in RLKM Spring festival of 2015. So many concerts in between, but this did not find a place.

The husEni outline brought out my worst fears. Such a majestic outline, could have been rendered for hours together, yet one would be left wanting for more. The sowkhya in the short outline indeed cannot be explained in words. The kriti "raghuvIra raNadhIra" was rendered beautifully with nice swarAs at pallavi.

The varALi AlApane that followed was as grand as it could be. manOdharma elements wre pristine. At one point, the single pluck and quick mTu created a long lasting breathless expression of varALi chAya across the 3 registers. There was brief thunder in the applause from the audience. (May be that affected/ created the unpredicted downpour 45 mins later in the concert).

The first of the VD school composition came in form of "vAchAma gOcharuDani nIpAdamulaku " after a brief AlApane. CNR took time to explain the difference in presentation styles in various schools, and what he would render in this concert. Another rarely heard composition marked the highlight of the evening. It was rather mid paced kAlapramANa than the usual hurried one.

The popular kriti raghuvamsha (rasika request) took the spot of the filler, rendered with much finesse and evoked a lot of appreciation from everyone.

The tODi AlApane was done flowed with effortless ease. It was a class apart from what I heard yesterday in the same venue ( though its not logical to compare voice v/s vINA). It was elaborate with all the essentials of aesthetics, sowkya and bhAva thrown in. CR responded with confidence and fluency.

Rain Gods wanted to witness the magic unfold. The sound engineer who doubled up as groundsmen (with other support staff), noiselessly reorganised the speakers and lights to be saved from the downpour. They resembled the pit crew in a F1 race in their speed and finesse. Manodharma was not affected as the artists continued to explore tODi. As the grand alapana was taking shape, my thinking for the song was one of three possibilities: either a tyAgarAja -rAma krithi,  or shyAmA shAstri swarajati (to mark his star birthday /an RTP. But it was none of those,  OVK's krithi as OVK is CNR's favourite composer too the prime slot of the concert. The choice was excellent.

tAye yashOda is a beauitful song, isn't it? What a gift from the composer!. Of all the forms of rendition, vINa is best suited for presentation of this song, and oh boy! what a combination for the day ?? (this is my personal feeling though)

KUJ and NA where was subtle and supportive all through the concert. The thani avarthe between them was good, the thIrmAna being quite interesting (which was also highlighted during the VOT - rendered by a musicologist who was present all through). The sound I felt the mike volumes were perfectly balanced, even with percussion duo being young and energetic, the sound was tuned to a low volume to guarantee sowkhya even during tani.

On the whole, although the ragas were common ones, the rendition and choice of krithis made this concert a perfectly enjoyable one. I think the days of extraordinary violin accompaniments have come with the likes of Charulata ( AKkarai / HM Smitha / HN Bhaskar / BU Ganesh Prasad) getting many opportunities with the masters enabling them to hone their skills. CR has been the player of the series, with me attending 6 of her concerts, each being top class. This one was exceptional.  CR was good in all parts as usual. With every concert she is proving her capabilities of playing as one needs to play accompanying the main artist. She stood up to the main artist all thro' the concert.

KUJ and NA were quite playing all the kriti on the mridanga / Khanjari. They played with such anticipation and was very good even while accompanying the neraval and swarams.

The concert was simply electrifying. Each artiste gave his best for a thoroughly enjoyable concert. Though CNR can deliver a standing ovation worthy A-Capella concert,  the accompanists today added their contribution and made the big difference to the whole evening.

The GRAND FINALE concert of the season was very good and filled with classicism from the word go. Starting though a tad of time late, CNR was in no mood to dilute the music for the accommodating the delay. He was still his fullest.

What a way to end a 25 concert long season with such a high note !!