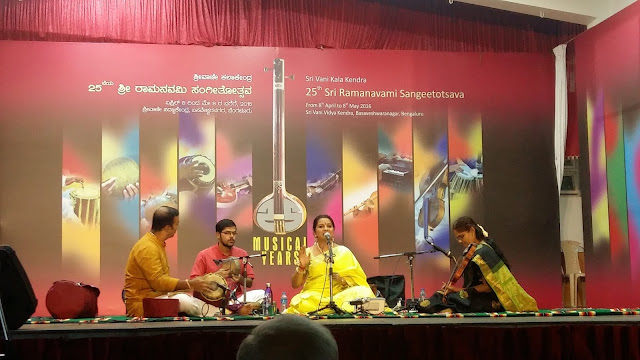 Vid. Mahati started with the famous daru varNa of Mutthiah Bhagavathar in khamAs. This composition is rarely treated as an opening varNam; past masters like the late KVN invariably sang this as the 3rd or 4th piece in a concert. However, it was a refreshing change to see this first up and it set a brisk pace to the whole concert.

She then followed it up with the not so frequently sung ninnE bhajana of tyAgarAjaswAmi in nATa, with a sprightly chiTTaswarA passage and some rounds of kalpanA swarAs.

It has been a while since I heard one of the pancharatna kritis in a concert, and a rendition of endarO mahAnubhAvulu sans any kalpanA elements was very welcome.

The first major AlApanE of the day followed that in the shape of pUrvikalyANI. It was unambiguous pUrvikalyANI with no hidden shades of pantuvarALI. A purandaradAsA composition that I had not heard before was presented. In its musical setting, it was more like a bhajana sampradAyA composition. In fact, it reminded me very much of a bhadrAchala rAmadasa composition (iDigO bhadrAdrI in varALI) that Sri Balamuralikrishna has rendered. KalpanA swarAs were rendered for the Pallavi, but the structuring of the landing left something to be desired - the attempted poruttams did not flow seamlessly to the eDuppu.

tODI was taken up for the main of the day. An elaborate edifice of tODI was built, with some interesting grahabhEda to mOhanakalyANI - CR in her response played mOhana in grahabhEda. The way the AlApanE was moving had me guessing it was going to be kaddanU vAriki; that proved right, but I was pleasantly surprised when she skipped neraval at the usual nIdurA nirAkarinchi and chose the next like paddU tappaka instead for elaboration.

Tani by the young percussionist was just apt.

A quickly rendered sloka in ragamAlika was rendered before OVK's Sindhu bhAIravI thillAnA. The younger generation of artistes need to be encouraged to spend more time on slokas / viruttam / ugAbhOgA - most treat this as a checkbox to be ticked and not exploit the musical potential of these pieces.

Overall, I would say it was a good concert, but it was missing some X factor that takes it beyond the pale of the ordinary.

CR as usual was impeccable in her ability to shadow the main artiste; she is really an asset to any main performer.
at May 06, 2016