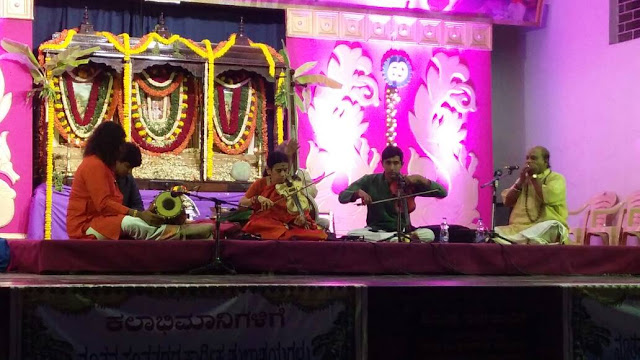 
04 composition in rAga krishNa by venkaTagiri rAja son (A)

I had not had an opportunity to listen to the newly crowned Sangeetha Kalanidhi for quite some time, especially after the announcement of the award. While I have had the opportunity to listen to her next-gen disciples who have been making their mark for quite some time, including the latest addition of Nishanth Chandran, the craving was at a high level.

The options for today was quite clear. I had never been to any such long festival in recent times, on the last (nostalgic) day. Expecting a packed hall, I was there almost 60 mins early and also the beat the infamous Bangalore Traffic.

The crowd starting pouring in, and the packed audience were waiting for the climax day of the season. SK Vid. A Kanyakumari had a special felicitation on occasion of her first performance in Bangalore after receiving the coveted glory.

The ease with which she took off to set the stage demonstrated her standard rituals of offering her meditative prayers to almighty at the beginning of the concert.

The nATa outline reverberated throughout the college corridor, adding luster to the already husky timbre of her pick-up mic violin. Though it appeared dilapidated than her recent pictures on web, the sound was still strong. karimukha varada, a composition of GNB set the tone for a long evening. The kalpana swaras were played outright in 2nd speed with Vittal Rangan getting an opportunity to demonstrate his talent in glimpses of swaras. They were well accompanied by enthusiastic percussion duo of Vid. Patri Satish Kumar and Vid. B Rajashekar.

kripa jUchuTaku was a filler without any embellishments.

maNirangu outline AlApane was done solo, leading into the ever popular mAmava paTTabhirama. Another evocative pace dealt the nuances of maNirangu brilliantly. There was no hurry in the presentation.

Vid. A Kanyakumari demonstrated why she was a worthy recipient of the coveted SK through her own invention KRISHNA rAga AlApane which was ably filled by Vid. Vittal Rangan who also had a sneak peek slot in between to fill up. The composition played next was on river Krishna. Though it’s a janya of chArukEshi, there were no overtones of it while they played all through the composition.

Audience requests kept pouring in ... through the performance and during the breaks. Mani mAma (an ardent fan of SK AK who was even earlier than me at the hall) put out a spontaneous request so loudly from the audience seat, it would not be turned down by the artists on the stage. The audience applauded the due consideration that was meted.  What followed then was a pure bliss SahAna AlApane and I vasudha.. delivered in a leisurely pace.

One of the audience requested for bhAvayAmi (rAgamAlika) and was duly honoured in place of a competing request for rAma katha sudha (madhyamAvati). A detailed rAgamAlika AlApane set the stage for a veritable presentation of bhAvayAmi.

At this point, I was seriously considering standing guard to the stairs, to stop new rasikas requests and allow the artists to dwell into their plans for the day. But the situation did not warrant so.

Any instrumental concert cannot miss a kadanakutuhala piece, and this was no exception. Quite creatively presented the chitteswaras with many wah wah korappus to embellish and provide additional opportunity for the percussionists to improvise it.

A detailed rAga and tAna in kharaharapriya was shared by both violinists. An unhurried, more than 30 mins of chakkani rAja and equally long and creative tani marked the hightlight for the grand finale concert of the season at sEshAdripuram.

Few tail pieces were presented after a formal Vote of Thanks. It was a memorable season indeed at sEshAdripuram this year with few notable concerts to remember for a long time for me.