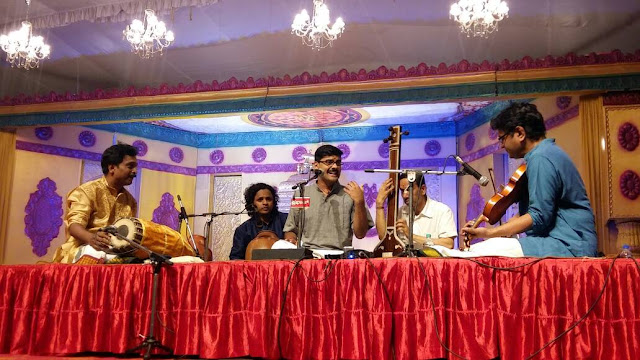 One attends a live concert to have an undisturbed bridge to an individual's quest to connect with one's inner self through music. When you come across one such a bridge that is never ending, it must be THAT 3 hour show, delivered with imppeccable acumen for both sahitya bhAva and bhakti bhAva by none other than the maestro Vid. Ramakrishnan Murthy

The sky this evening was gloomy bringing in a fear of a possible drenched out concert. But Rain Gods had better plans for the rasikas who wanted to traverse this bridge.

After few minutes being spent on setting up the mic system, the curtains rolled over to uncover a well lit stage what was even brighter by 4 stars seated in their respective roles.

The Grand evening started with guruvandana (madguru gajAsya..) and moments later darbAr varNa delivered in 2 speeds. The mics needed adjustment, before the next song began. It was

Being a Wednesday, BUDHA was paid obeisance in the form of the navagraha krithi by muttuswAmi dIkshitar.

The traditional AlApane in pantuvarALi was astute bhAva and commanding brilliance in bringing the sap in a short span of 3 mins of vocal presentation. Violinist responded equally brilliantly. vADEra deivamu manasa was a treat to listen. The tempo matched the prayful pathos with nereval at dhātṛ vinutuḍaina tyāgarājuni meaning (O My Mind! He alone is The God who, having accepted the worship of Lord Siva )

Without a filler, Vid. Ramakrishnan Murthy dwelled to develop madhyamAvati, and the obvious choice was rAma kathA sudha. quite elaborate presentation made this the sub main piece of the concert. Violin response was a shadow image of the vocal presentation. Neraval and swaras were adequate . Korappu was creative and so was the anticipation by the team to respond to it. The teaming was very evident. For all the reportaire he holds, was expecting another not so popular tyAgarAja krithi in this rAga. A very short tani followed the kriti presentation.

swAmi mukhya prANa in yadukula kAMbodhi( though i have heard the same in other rAgas , especially in Anandabhairavi is evocative as compared to yadukula kAmbOdhi) was crisp and presented the composer skills of Sri RKSK who had taught this to Vid. Ramakrishnan Murthy.

Todi AlApane began with a short cycle, disappointing audience. It was just 1 hr 45 mins into the concert and nothing elaborate coming in. But it was a surprise to be delivered. The second cycle onwards the elaboration was pretty detailed exploring many sangatis of tODI. A 30 mins presentation of rAga and tAna had done its foundational duty for an intricate pallavi. tAraya sadA rAmachandra mUrte, KOTita shivachApa kIrte, presented with a 2 beat edupu on a 2 Kalai khaNDa triputa tALa had all necessary technical embellishments. rAgamAlika transition to and fro was seamless and demonstrated the creative capabilities of both vocalist and violinist. Second tani too was shorter than the first one ! even the percussionists wanted to listen more to the singer.

post-tODi RTP , the concert comprised of thukkadas, was executed very well. Organiser hinted the requests for "jAvali" and "tillAna" were honoured. shArade karuNanidhe , a composition of srigeri seer tuned by Vid. RKSK in hamIr kalyANi was sedate and set the tone for a power packed "thrillAna" in pUrNachandrika, composed by Puchi Srinivasa Iyengar.

The percussionists - Vid. Bangalore V Praveen and Vid. Giridhar Udupa played together as a team, though at times I felt, Mridangist was overpowering both singer and the other percussionist. 2 Tanis that were delivered were crisp and was surprising, the long solo turns never came up !

A strenuous day that started very early at 4.30 (after a short previous night sleep) ended with as simlar freshness when the last note of the day was delivered at 9.45 pm ! It was indeed a spiritual journey of oneness with almighty and a well spent evening.

Long live the tribe of Ramakrishnan Murthy
at April 20, 2017