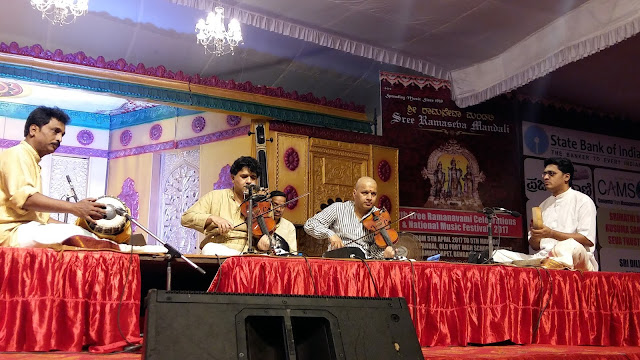 
The brothers are noted for their onstage experiments, a few of them I'm witness to and few of them I have taken pains of writing too. These 2 concerts were no exception.

During the concert at Vani School, the younger of the duo started soliciting swara sthAnas to compose a raga for the main piece RTP for the day. As the inputs flourished, it turned out to be rishabhapriya and the brothers demonstrated their authority with unmistakable ease. It just showed the amount of sadhana they had done during their formative years to exhibit this level of confidence in front of a large audience. Their father who was in audience also was one among the cheer leaders for the artists as they received abundant applause throughout the concert.

The presentation was exquisite. While every moment of the concert was of high caliber delivery by the team, this was the highlight of the day. A heavy rain at the end of the concert ensured the audience basked in the reverberations of a high-energy concert that just ended.

I was sure to follow the brothers wherever they go. They have become a rare sight (is that the right word?) for Bangalore audience. My next stop was at Sree Ramaseva Mandali the very next day.

The brothers scaled a notch higher today as compared to yesterday. To pay tribute to tyAgarAja's exclusive laya contribution "dEsAdi tALA", they felt it was injustive to play only one song in that tALA. Hence, they decided to deliver entire set of tyAgarAja's dEsAdi tALa compositions as a rAgamALika. They named it as tyAgarAga. Thanks to them, here is the link to the live recording of that performance. Even after these many days, it raises goose bumps while I relive the moment. An inexhaustible mine of music has just been captured for posterity for rasikas to relive the legendary stories of such immortal performance.
LINK

A repeat of yesterday's experiment landed up in rAmapriyA for RTP. No doubt, it’s a rare treat that could be expected only in the such capable fiddling monks.

It left the audience dazed, stunned and wonderstruck with its incredibility which feeling that would continue even after the concert is long over.
at April 10, 2017