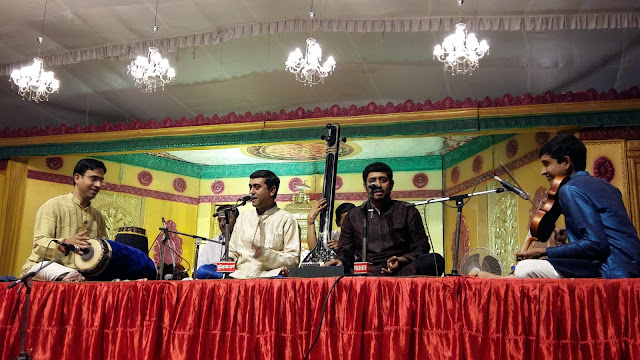 After their last concert at Odukattur mutt (they had just completed the namami gange project at that time) , I have been wanting to hear Trichur Brothers for a long time. Till date it’s been only 5 of their concerts over the last 5-6 years since I heard them for the first time in Music Academy. While I had the opportunity to recommend my better half to attend their concert, I was this time lucky I had her company.

Their usual mridangist (their Dad) was missing in action today! and the scene in green room / stage looked normal, for the audience to be taken for a surprise at the end.

The first thought that came across my mind as they started the shaNmukhapriya varNa was what beautiful voices God has blessed them with. I saw a thumbs-up from my better half. They sounded exactly the same in their live voices as compared to their namami gange theme song. Surprisingly, this was a tribute to late legend BMK who is no more with us. One of those honest tributes that I have come across.

Another new item for the season was the ganapathi stuti song in IsamanOhari.

Stellar delivery came in form of vasantha bhairavi swaras that flowed faster than any tall waterfall. Smooth and sturdy, bringing in the best of the sounds the nature could emulate. NalinakAnti notched up a T20 mode of swaras where each turn taken by the brothers was a treat to listen. Vittal Rangan excelled brilliantly in his responses.

A detailed alapane, the magnum opus rAma nI samAnamevaru and an equally long tani occupied 75 mins of the concert. The audience did not move a bit.. during the tani. Vijay Natesan who got an opportunity to perform in such a big stage did not dissapoint.

RTP in shudda sArang kept the audience guessing, until the tAna started. rAgamAlika swaras from both vocalists were replicated by Vittal Rangan in a smooth transition. I like this way of replying to RTP rAgamalikas when accompanying dual singers. Its a welcome change amidst the generic second singer's choice replication.

Few tukkadas did receive judicious time and were delivered in unhurried pace.

My better half concludes : The positives that made her enjoy the concert were their appealing voices, good control over breath, good shArIra to generate good sounding voice in all 3 octaves and an aesthetic sense that appeals the new generation carnatic lovers. Neither too stuanch nor diluted.  This was further validated by another first time listener who was seated next to me!

They took turns at doing the alapane, assisting and complementing each other well especially each singing in different octaves that makes it a treat to listen and watch. At many places, while one of them sang the alapane, the other just continuously sang the note with which the sanchArAs began, with good control over his breath. Something similar was repeated while one was singing kalpanaswaras, other continued to sing the sahitya syllables that added lustre to the whole experience. This is the first of the concerts where the brothers did neraval (see my cribbing in last year Ramanavami concert review) in vasantha bhairavi and kharaharapriya. None of their previous concerts had a neraval!!!!!

It takes a strong will power backed by daivANugraha to deliver such a stellar concert, inspite of a bereavement at home. Their committment to be here to deliver a concert and make it grand by delivering a stellar 3.5 hrs concert is worth a standing ovation. The audience did deliver one when the developments at home were made public during the Vote of Thanks.

I would highly recommend the brothers to anyone who hasn't heard them yet. If they keep going like this and keep learning from their experience, the day is not far when they will make it really big in this field. I’m sure I was able to see an observable change from what I heard them last year double header concert in Bangalore during Ramanavami Season. Hope you will observe the same when you listen to them next time.
at April 22, 2017