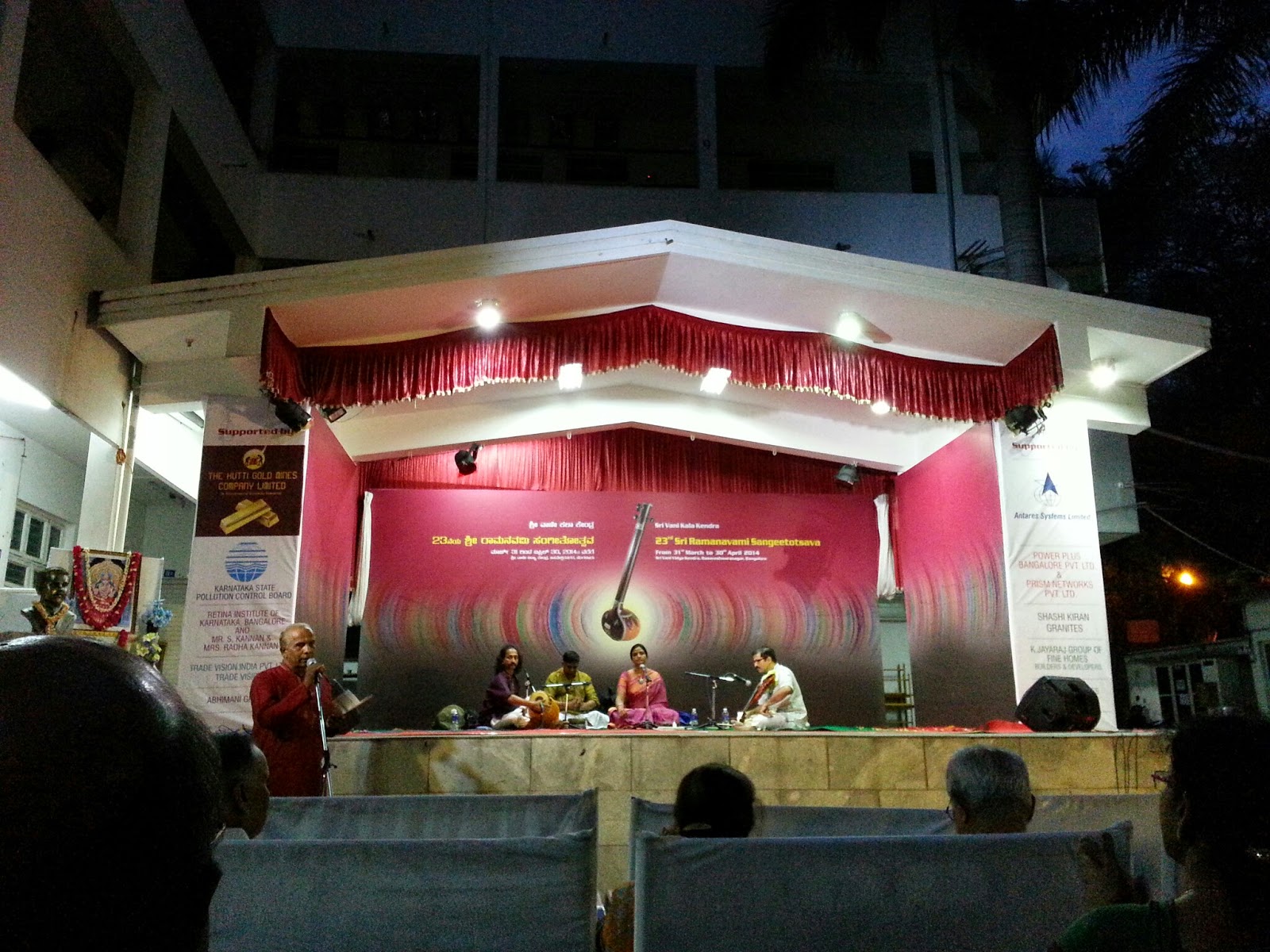 
Its almost 18 days into the concert season, and I must thank almighty. The big 6 rAgas have not yet found their place in the lists.. and yet the artists are delivering stellar concerts.

2nd concert of Dr Rama on the trot for me and did not want to miss this in the hindsight of her concert at RSM.

Rain at dusk hinted that its going to be a tough evening. Though the weather had cooled down, rasikas were a bit jittery to attend as it could rain and mar the concert. It did so for a brief period. But the strenght of bhakti and bhAva ensured that it rained elsewhere in Bangalore and not at vANi school.

With a brief outline of kApinAraAyaNi, Dr Rama started of the usual filler track sarasa sAma dAna.. and went on to sing nereval and swaras. The first delicacy of the evening was served with utmost deligence.

Likewise RSM concert, she picked not so regularly heard paritApamu as a filler. manOhari was real manOhari to ears.

By now the voice had cleared and she started of the next composition with a detailed AlApane of yadukulakAmbOdhi. A detailed alapane ensured a right foundation for the detailed presentation of hechcharikaga rA . Swaras  in sarva laghu and same tempo made their mark.

Another rare kriti .. kOdandaramam... filled in the small space before a detailed alapane for next composition. Except for this.. it was mostly a tyAgarAja affair all through the evening.

chandrajyOthi had all the ingredients to make up for a sub main of the concert. Both artists delivered the rAga bhAva appropriately. shashi vadana carried the bhakti bhAva created during the AlApane ... I was so absorbed in listening the presentation that I thought the Mohra Korvai came in too quickly. Again a good thing in my books.

A brisk filler in kannaDa came in before another sedate presentation of kAnaDa. Since the concert had a delayed start (its almost a daily affair here.. as the concerts start at 6.45 even though the event schedule note says its at 6.30) Dr. Rama dwelled into a brief tAna in kAnaDa. Guessing it to be an RTP.. she quickly took off the pallavi line of the song keeping the audience guessing until she sang the anupallavi of the krithi. I was seated remotely (Singer out of line of sight) and could not see the tAla to make an educated guess of either RTP / krithi.

A detailed tani followed a detailed nereval and swara prastara.

Earlier when i had requested another artist to sing a full lenght mangaLa, it was turned down stating that none would be patient to listen to it. However, Dr Rama proved it wrong. For the first time in my attendance to more than 600 concerts.. I heard all the charaNas of pavamana song. Its just the tip of the iceberg of her vidwat.

Mridangist and Khanjira Vidwan played apt supporting role without jarring the volume balance. The percussion was soft throughout the vilamba krithis and had appropriate muktAyis.

Overall it was a memorable evening and a memorable ride with my friend Jackie to this concert. Also got to learn a lot from him in our discussions during the ride.
at April 19, 2014