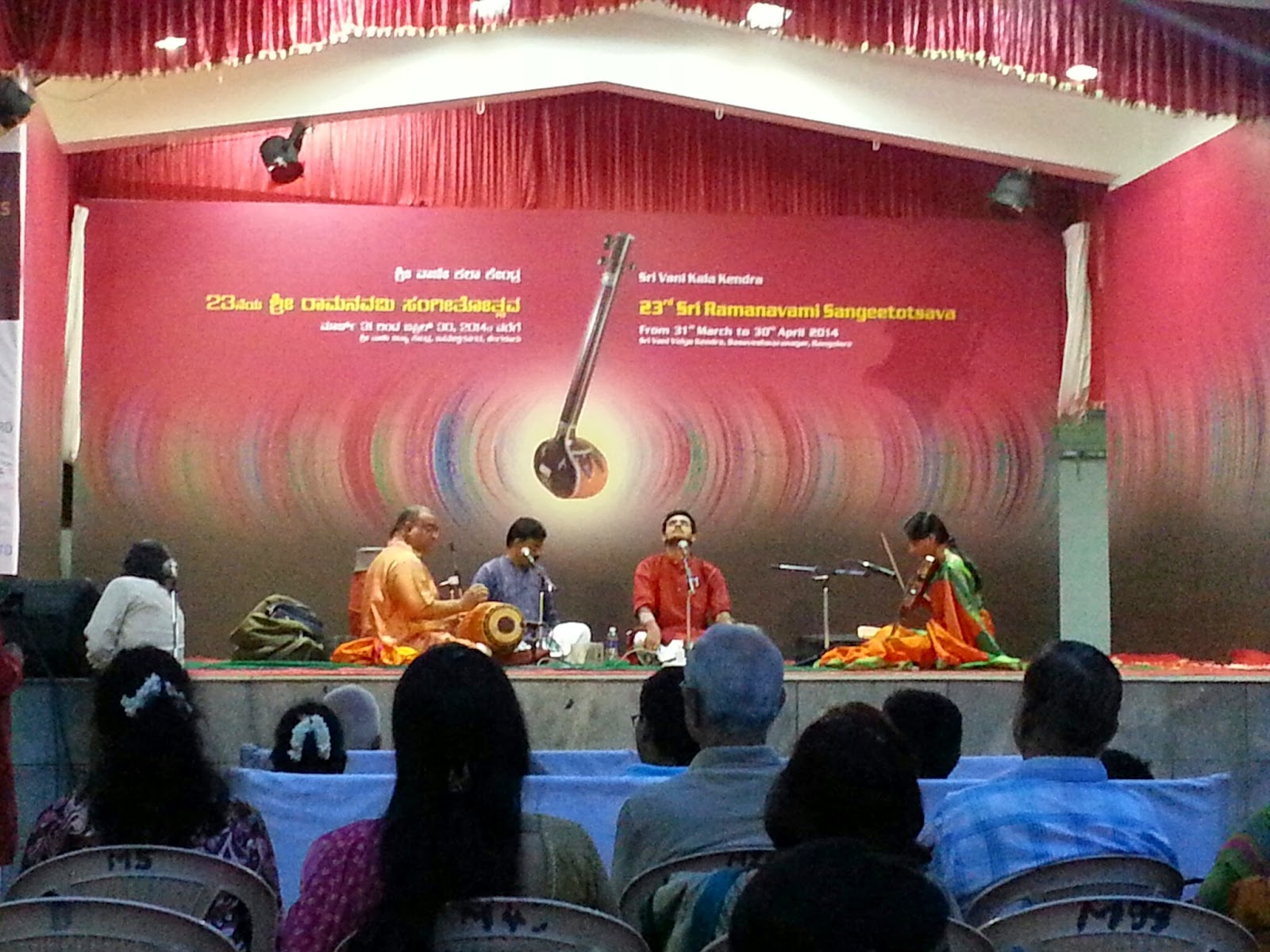 
From the very first note of bhairavi outline (sung with 100% diction), it went on improving until the mangalam was sung.

I ahve been attending Ramakrishna Murthy almost everywhere in Bangalore and this was a concert not to be missed. What a talent. O

A heavy composition of upachAramu surprised me. Expected a bhairavi varna (and my mind was trying to ring a bell on a possible rAma based varNa!!). I was completely proved wrong. . 16+ minutes presentation of the very first song.. finds him in the company of TMK who is known to start the concert with a heavy composition. Nereval and Swaras flowed effortlessly.

HM Smitha has been improving leaps and bounds between each concert, and her dextrous fingers demonstrated that during bhairavi and saraswati manOhari compositions.

enta vendukO was a filler.

The evening had only 2 alapanes , and i would well conculde in hindsight that next composition in pUrvikalyANi / gamakakriya was the sub-main,  with elaborate but superb alapane by both artists, nereval and some lightning quick swaras.

Ranga pura vihara was induced trance. bhAva needed for the krithi was peaking on each note presented.

Another filler in the form of Samaja Varada (not frequently heard)

RTP in kIravANi (an impromptu one I believe seeing a small discussion with violinist at the end of alapane by both of them). tAna was presented in form of ghana raga malika and ending in the conclusion the same rAgas were in the reverse order of the ragas he had just sung.

Total confusion.. to guess what would come next.. Pallavi was simple embellished with sahana and bEhAg rAgamAlika swaras.

Smitha, followed the singer like a shadow, playing every sangati. Her accompaniment to RaGa sisters at Gayana Samaja was equally brilliant.

Concluding pieces included a mOhanaviTTala dAsa krithi in bEhAg, a detailed shlOka in rAgamAlika (presented with full bhAva and bhakti... it still resonates)

a tiruppAvai in suraTi and transitioning into mangalam kOsalEndrAya.. concluded a great evening.

My attendance to his next concert at sEshAdripuram is confirmed !!

An excellent and emotional concert enjoyed by all immensely. I cant fathom the low attendance to such kind of great concerts that vANi school has been organising.