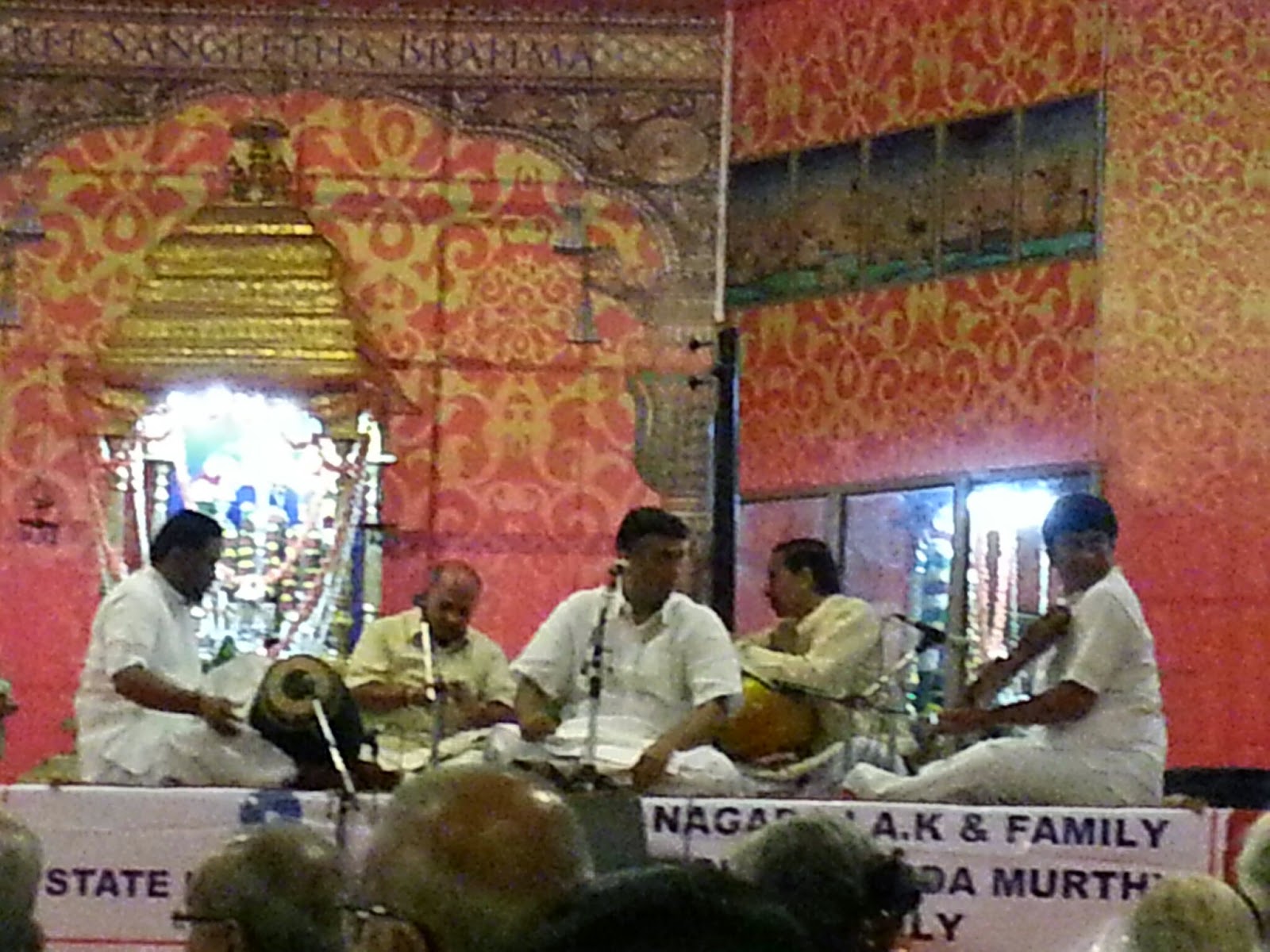 
Sanjay is one of the few main stream vidhwans whom we can always expect some innovations. New things but well within the boundary of pure carnatic music. Even the almighty knew it even before the concert started.

The rain that started even before the concert showered its blessings and applause for almost 40 mins. This was the second shower of the season, but the first one right at the concert hour. I just thanked almighty for indicating what is going to come through the evening.

The brisk humming of Kannada gave ample indication to rasika that he will be getting a whole sum Treat. After humming kannada sanjay sang a varnam, even though short had all ingredients of a typical varnam.

Sri was next and Sanjay voice was so nice that Sri Varalakshmi would have been smiling all the way when he presented the MD song.

Varadarajan was giving his best. Returned all Sanjay’s swaras well.

rItigauLa AlApane was very melodious and the kIrtana followed was also good.

Then Sanjay presented two lovely back to back alapanas , we can say three including ritiguLa.

Ravichandrika and kokilapriya alapana were really highlights of this concert.

A vidhwan or vidhushi can sustain rasikas interest well when they present a detailed AlApane of known ragas like kalyANi, tODi or shankarAbharaNa etc.

But to make rasika appreciate with involvement of lesser elaborated ragas in concert circuit like Ravichandrika or Kokilapriya really need boldness and guts. Only Sanjay can do this.

But I was not impressed with tanamalika ,reason will be given shortly.

The pallavi was in praise of lord muruga, a girl who loves "muruga" says to her fiend with so much confidence that lord muruga who married valli is her relative or her lover also.

Sanjay is one of the few vidhwans who not only sing but also bring lot of emotions or rasas in his songs or pallavi line.

I am imagining if the ragas sanjay selected for tana malika could have been used for pallavi ragamalika swaras it would have been fabulous. Pallavi was very short after few rounds of bahudAri swaras he wounded the pallavi.

He could have brought muruga’s courage or bravery in shankarabharana swaras and pallvi line, could have brought romantic rasa in hamirkalyani or happiness in hindoLA, majestic feeling in tODi, helplessness in varALi and saraNAgati or karunyam in sahAnA and desperate feeling in hamsAnandi..Sanjay !! we missed all this. The pallavi line was also more suited for bringing nava rasas. KhamAs virutam and song on kApAlEswara was very nice.

Over all a good concert with lot of sowkyam and innovations, that is expected from master correct.

When almighty himself had applauded even before the concert, I ran short of words to thank him for getting me this memorable evening. The audience did their part at the end with a long standing ovation.
at April 13, 2014