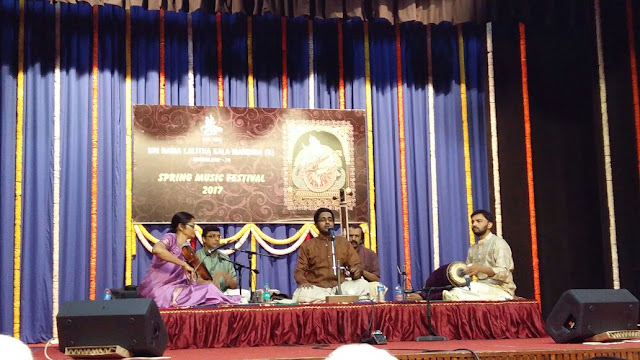 
It is rarely that a phenomenon takes place in the world, and very rarely you are a witness when its in the making. It is even more rare that you recognise it when its happening and enjoy the feel of being there. An epoch-making artist of far-reaching consequence that would change the course of history, or make an impact that will reverberate for the generations to come, especially in the field of his expertise.

The advent of a younger generation musicians has all heralded new beginnings in their own realms. Especially, in the world of Carnatic music, the advent of artists like Abhishek Raghuram, Vid. Ramakrishnan Murthy, Vid. Saketaraman, Vid. Bharath Sundar, Vid. Shashank Subramanian has changed the course and perception of music, among the generations of rasikas alike. The harbingers of a new age in classical music, these youngsters draw and sustain full house rasikas through the entirety of the concert. No rasika will go back home wanting for more after a full 3-hour treat. Never ever they have ended the concert earlier than schedule, promising 110% of their potential in each of the concerts. Not without reason, the foremost of which was they are contemporaries and their work is such that after their times, Carnatic music was never the same again.

Last 3 concerts of Vid. Abhishek Raghuram (@Nadasurabhi Nov 2016, @MMA Dec 2016 and the current concert in context) has been blowing me and other audience off their foot and elevating to greater heights. His work was an embodiment of grandeur and depth, both in melody and poesy, afford us a glimpse into the summit of perfection he attained and the heights that he can scale when there is no restriction on the closing of the concert.

Vid. Abhishek Raghuram's music is a throwback to many past masters, primarily the late GNB, but the late MDR is not immediately invoked when you hear Abhishek in full flow. Nothing in the music is common at an apparent layer between these two artists. However, Vid. Abhishek Raghuram's recent concert at SRLKM Spring Festival took me back immediately to what is possibly my favourite MDR concert - with the same RTP in SankarAbharaNa (vinavaIyyA panCanadISA) and a reasonably elaborate SrIrAga AlApanE. If you peel the music past the speed, there does exist some commonality of musical sensibilities between these two artists!

Vid. Abhishek Raghuram started with a brisk rendition of the kalyANI Adi tALa varNA, with some quick fire swaraprasthArA. O jagadambA in AnandabhaIravI followed, though not a very sedate pace.

After a brief outline of jaganmOhinI, sobhillu saptasvara was presented in a majestic gait, with Vid. Abhishek Raghuram's trademark swaraprasthAra at the Pallavi. sahAnA was leisurely by his standards.

The first major AlApanE of the day followed in the form of a brilliant pantuvarALI, followed by the not often heard sAramEgAni of Thyagaraja. An elaborate neraval at sAma gAna vinOduni and swaraprasthArA followed. Then came the elaborate tanI AvartanE - my ability to dissect the technical aspects of the tanI is very limited, so I shall limit myself to saying that it was elaborate, with very clear nAdam from both percussionists and I could make out several patterns in miSram and khaNDam, besides the usual Catusram and tisram. It was received very well by the audience at large. 40 mins did not appear to be a dragging one.

heCCarikaga rArA was rendered again at a pace that was leisurely by his standards, but the closing of the song with sanCArAs in the tAra sthayI, I felt, went against the pleading or cajoling spirit of the song. Minor quibbles I must say.

At this point, Vid. Abhishek Raghuram asked for requests for rAgA for the RTP and there was a veritable Tower of Babel of sounds. What irked me a bit was a consistent call for devarnAmA at this stage - here was an artiste asking to sing an RTP, and a part of the audience was already pushing him to the tukkaDA section! Anyway, AR announced that Vid. Charulatha had requested him to sing nAma kusuma in SrIrAgA, and he proceeded to give a splendid rendition of the same after a fairly elaborate AlApane. Again, having heard this particular kriti by SSI, MDR and a couple of years back by TMK  (@ SRSM, 2014) in Bangalore, it did feel more hurried, but I still came out feeling quite satisfied with the whole piece. The AlApane in particular was grand for a track to be delivered just before RTP.

RTP duly followed and in a grand SankarAbharaNa too! While the AlApane and tAna were brilliant, the pallavI and its neraval was truly stupendous. The technical embellishments that AR provided into the neraval were a tough act to follow and the accompanists did seem at edge! Part of the neraval was done in graha bhEda mode, transitioning to kalyANI and tODI. Unfortunately, as Vid. Guru Prasanna had a hard stop, the pallavi was shortened quite a bit.

For the same reason, the concert wound down pretty quickly after that, with an annamACAryA kriti and patiki hArathI, followed by the mangaLam.

At the risk of hyperbole, I believe AR is truly on the verge of being inducted into the Carnatic hall of fame of all time greats. Some viLamba arrows would complete his quiver and push him firmly into that pantheon.
at February 10, 2017