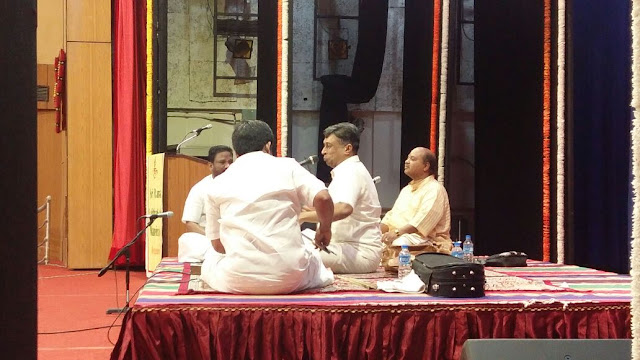 After a disastrous SankrantiFestival Season @ RLKM (read my views HERE), I was on a self-declared hiatus on listening to concerts. Though I could not resist myself from the 2 concerts in between, I was looking forward to a spectacular series at SPRING FESTIVAL by SRLKM.

I could not attend the inaugural of the event but did not want to miss Vid. Sanjay (it's almost 2 months ! since his last concert at Bangalore). Was back in town and the vocational engagements were minimal on a Monday which paved way for an early exit from office. Concerts being scheduled at 1745 puts additional pressure (unlike other concerts which are usually scheduled at 1830 in Bangalore) to leave office earlier than normal.

When I reached the hall at around 1715, the hall was filling up. The artists had already arrived, with Sanjay flying down from Singapore where he had delivered another 3 full hour concert, the previous evening. What an energy this team pumps in, for each of their performances!!

The humming behind the screens of recently renovated hall of Bangalore Gayana Samaja was crystal clear with improved acoustics. The audience set their clock to 1745 when the curtains rolled aside. It was yet another ON THE DOT start for the concert.

The bEgaDe varna, one of the newest entries into Varna quiver of Vid. Sanja was presented in 2 speeds. Both his white musketeers have learned the art of running along with him when he presents something new on stage.

First of the surprises for the evening, another new track for Bangalore audience, a purandara dAsa composition in mukhAri ringed the ears. Flourishing swaras added to the clear diction and pronunciation of the kannaDa lyrics of the song. Obviously, the song ended to a thunderous applause from the audience.

Very rarely, Vid. Sanjay takes up a sedate rAga for the first AlApane of the concert, but today was an exception. The very take off till the landing of violin return carried audience to a different world. The kamalAmba vibhakti krithi that followed did not have any embellishments. The AlApane had already taken care of delivering the necessary manodharma for the composition

Without wasting time for a filler, the husEni AlApane followed to the delight of the audience.  eppaDi manam tuNindadO with 2nd-speed swaras back at Pallavi added punch to the presentation. Vid. B Rajashekar was creative in his accompaniment while he attempted to play the swaras on morsing.

2nd purandara dAsa song came in form of enna rakshiso in shubha pantuvarALi was another delightful presentation for the evening. The undoubted enunciation of lyrics reflected the long hours of practices that must have gone behind adding the musical touch and strokes.

The detailed AlApane showcased the creative brilliance, Vid. Sanjay and Vid. Varadarajan carries through their experience. Lasting over 35 mins, the AlApane did not sound boring or repetitive. Neither of them was in a hurry. It was presented very leisurely, of course with some trademark style that Sanjay adds to his presentation. Every time the speed remained constant, I was wondering whether it would eat into the RTP slot in a 3-hour concert.

Enduku peddala and its leisurely paced presentation was a delight to listen as Sanjay seemed to have embellished his own previous best presentation of this Krithi. Detailed cycles of nereval before venturing into swaras at Pallavi was the hallmark of the presentation. Swaras in both speeds and 2 octaves added to the illustrious presentation.

Tani between Vid. Venkatesh and Vid. Rajashekar was akin to watching Sachin and Dravid bat in tandem to score their record partnership 331 in 1999 against New Zealand. The long spells and short cycles had all the finesse and creativity abundantly sprinkled all through the 20 mins performance.

2.5 hours into a 3-hour concert ensured that there was no scope for an RTP.

A momentary outline into kAnaDa and dwelling into a brief presentation of mAmava sadA janani certainly delighted his first-row audience (Prince Rama Varma) who was all ears and attentive through the concert.

Indu Shruti smruthi baLasi (in kOsalam), another of the purandara dAsa composition added to Kannadiga Audience. While 2.45 hrs was already into the concert, Vid. Sanjay and team threw the biggest surprise for the audience delight. With octagenarian and septuagenarian VIPs already vacating the front seats by then, I had an opportunity to shift to front seats.

I had to rub my eyes and ears a couple of times, to believe that Vid. Sanjay had actually taken up RTP at that hour ! Abundant energy indeed. Yet another leisurely presentation of rAga and tAna added more brownie points delighting the audience. Time tested Pallavi line: murugaiyanE pannirukaiyanE... vaLLi daivAne manALane with ragamAlika swaras in pleasing ragas to go with the main raga made the experience more complete.

ellAm sivan seyal enrE in Kalyani, the first of the flurry of tail pieces had its justified pace and elaboration. 4th (yes 4th) of the purandara dAsa song nanda tanaya added to the delight of the audience who had stayed back till the very end. It was my first experience in a non Kannadiga main artist concert to listen to 4 purandara dAsa (or for that matter, any Karnataka / Kannadiga composer) songs on the trot.

A tiruppugazh before the customary Pavamana brought an end to the 3.5 hours concert.

The accompanying artists, Vid. Varadarajan on violin, Vid. Neyveli Venkatesh on mridanga and Vid. B Rajashekar in morsing are all highly accomplished, senior artists demonstrated perfect understanding with Vid. Sanjay and provided excellent support throughout. I think that added to higher energy levels throughout the concert.

Vid. Sanjay is one such artist that none would mind listening longer than the scheduled close. Kudos to Vid. Sanjay for such a meticulous planning and execution of such a memorable concert, with many new tracks by him for the first time to Bangalore audience. A cool pleasant evening had come to and it was indeed one of the best concerts that I had heard by Vid. Sanjay. It was a perfect antidote to the way year started musically for me.
at February 07, 2017