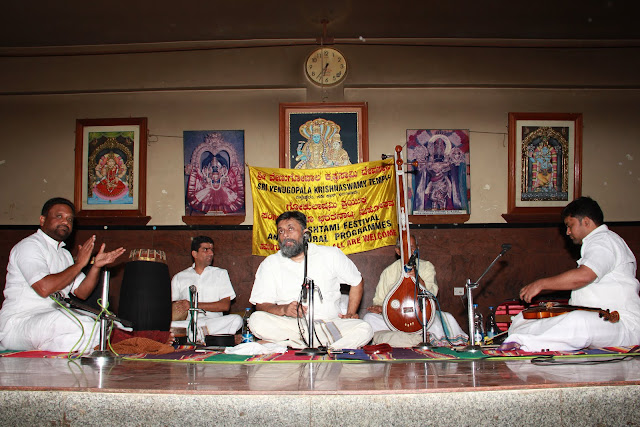 The overcast day bore the best weather for a concert (or for the lazy bums - a cup of chai and hot bajji/ Bonda). I chose the former, to witness the master in his new avatar. I believe the music has also reached that level of popularity.

Notwithstanding the possible troublesome ride through the Sunday market at Malleshwaram that leads to the venue (Being the last weekend before another pair of festivals next weekend) expected to be entertained by the not so KARNAtick jam on the road. The ride offered a different experience.

Being at the venue earlier than standard lead up time, provided ample opportunity to catch up with a few online friends who share similar music taste.

While the stage was still being setup by the mic-man, was in for a pleasant shock to see simple amplifiers and nothing else that lead the cables to the mics. Wondered if this would be sufficient to create ambience for a great evening. That was complimented by down to earth Vid. Sanjay who as usual, did a couple of seconds of throat check before starting off the flood for the evening.

I had the prime spot to witness the happenings of the evening, 10 ft across the stage right in front of him (as the picture indicates my perspective)

Raising directly to the tAra sthyAyi, the pantuvarALi varNa brought in the first whiff of what was in the store (like the oggaraNe at home) for the rest of the evening.

Making way for a shudda- madhayama krithi, the ini oru kaNNam krithi in shrIranjani kept me in tangential thinking mode as I was prActicing AbhOgi earlier during the day.  The occasion being KRISHNA JANMASHTAMI, the krithi aligned to the divine mood of the day. The interesting swara patterns switching between ini oru kaNNam and Yadukula tilaka made the presentation much more attractive.

kannaDa AlApane followed by a kannaDa song "kaNDEn kaNDEn swAmiya bEDikoNDe" amongst the large populace of Tamil audience was a nice choice. Who else is a better choice than sangIta pitAmaha to praise Krishna.

Soundara rAjam in the sedate pace (I don’t think Sanjay can sing slower than this !) restored the energy levels of the artists as well as the audience. Would have loved AlApane in brindAvana sAranga, but you cannot ask for more when the best was next in store.

Whenever I drive to a concert, I'm in a dilemma on placing a request for a specific song. Today too I experienced the same (surUTi and bhairavi were on my mind). As a second thought, just pulled back myself allowing the master to present his choice than we pushing and distorting his list for the day.

First notes of surUTi made me appreciate my 6th sense. Déjà vu. The best zone of the concert began unfolding as both the artists started improvising the rAga. As it went past 15 mins, started getting clues of a possible RTP for the evening. Devoid of popular songs praising lord Vishnu, Vid. Sanjay's choice for the day was "verevvare nIvegati" praising the other form of Vishnu. Was thoroughly disappointed when the presentation ended without any nereval / swara embellishments! It would have been interesting to see what was the best spot for a nereval. (I could not find another rendition of this composition in my library !). After my recent learning on presentation of dEsAdi tAla, this was the first live experience of seeing one, without any disturbance between me and the artist.

tatvameruga tarama with detailed swara prastAra provided yet another opportunity to Vid. Varadaraj to prove his "BEING SHADOW" capabilities, when the last set of swaras were almost 2 minutes long, which I believe he replicated note-to-note !! God Bless these artists with great health and energy to keep the audience on their toes. Agree with a fellow rasika, on the whole composition being "sung in a carnival spirit"

Bhairavi notes poured out the suspense for the evening. Expected an RTP / bAla gOpAla. The detailed AlApane was methodical and classy. The heaviness of the rAga was leisurely traversed wide and deep, more paving way into a krithi than an RTP. bAla gOpAla and his all musical antiquities were delineated in various sangatis, with nereval taken up at vainika gAyaka. A very interesting choice, deviating from the popular spot in the earlier part of the krithi. The swaras too occupied a greater part of manodharma. The swara patterns ending with " ma pa da" was well replicated and refined by Vid. S Varadaraj.

Tani started with a brisk "arudhi". The second round was very elaborate with khaNDa naDe which extended to khanda triSra. Which was a risky attempt but well managed at last. The korapu was in triSra naDe. Tani Avarthane was finally concluded in a beautifully modified mohra and a muktAya in triSra.

20 mins of tail included karpUram nArumo, viruttum in bEhAg, nijadAsa, engum niraindhyAyai - some of Sanjay's favourites for Bangalore audience. While he declined to honour the organizer’s request of RTP, good justice was done in viruttum and sindhubhairavi AlApane that preceded nijagA dAsa. Each of the compositions praising the lord of the occasion.

Sanjay's eye for detail and his musical sensibilities were both on display in the charanam of brindAvanam iduvO. His differentiated use of "ka" and "ga" in the word "kAnam" to denote the Brinda"Vanam" and then as "gAnam" for the Lord's music - veNu gAnam to be specific - was really noteworthy

Vid. Neyveli Venkatesh adhered to a soft (sowkya) style of accompaniment all through. Varna was followed almost perfectly. Being a regular accompaniment, this is an added advantage. All others krithis were followed without disturbing the main artist's mood and imagination. The same continued in the main piece as well. Accompaniment to the swarAs was really appreciable.  The accompaniment to the nAma-sankIrthana was very soothing and well-balanced with melkAla naDais. Mukthayas to all songs were simple and accurate.

AlApanes themselves occupying more than 55 mins in a 3 hr concert itself is an indication of justice done to each rAga chosen for the day. In a marathon 14 years of continuous appearance at the temple for "gITa sEVA" Sanjay has never repeated a song on this stage - an indication of growing repertoire with Guru and Almighty blessings.

A memorable evening with Sanjay once again. Can’t wait till November when we get to listen to him twice !
at August 29, 2016