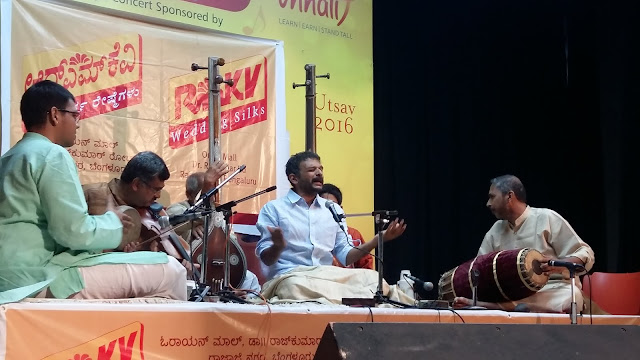 07 hE gOvinda hE gOpAla kAMbOdhi sUrdAs

A couple of years back, after being bitten by the travel + shutter bug travelled to Jog Falls (after seeing innumerable number of photos online) to have a glimpse of the nature and the feel of gush of water down the 253 meter fall. However, to my disappointment, could see only a stream of water flowing through the fall which was no bigger than my rain water drain in my roof top. It was depleted off its grandeur on that particular day!

I summarize my experience of yesterday's TM Krishna concert to something similar, albeit at a different scale.

On my way back, I was second guessing myself, was it the right time to visit the place. Though I had a mixed feeling on that day, at least for the drive all the way from Bangalore on smooth tarmac, A similar day saver for yesterday was HK Venkatram, and percussion duo of K Arun Prakash and Anirudh Atreya.

The inaugural concert at 39th Gokulashtami celebrations of SGBS Trust at Unnati began with a housefull (+ stagefull) audience packed at least 30 mins before the scheduled start of the evening affair. Though there was no mikasura appearance, a miniature form was the sound engineer assistant who could not differentiate between mid high (frequencies) with Mid / High Frequencies. That was a light moment at the beginning of the concert while the sound was being adjusted. Unbelievably all the setup was completed in much lesser time as compared to quite elaborate (loss of time) that I have experienced.

A small sketch of kApinArAyaNi paved way for the full flourished sarasa sAma dAna. While TM Krishna focused on neraval embellishments, HK Venkatram led the way in swara elaboration. The detailed affair brought out the best what one could deliver for KApi nArAyaNi.

The sedate zone of the concert started with an elaborate AlApane of bEgaDe, through some detailed and exquisite phrases being leisurely  delivered. There was no confusion of any sort in recognizing what was being presented. A padam "yArukkakilum bhayama" by subbarAma Iyer aptly fit into the sedate mood set up during the AlApane. Its a tamil composition that fit the bill for a large Tamil speaking audience who were able to appreciate the emotions of the nAyaki to her nAyaka expressed in this composition. TMKs recent experiences of singing for dance performance must have helped him to pace it at ati ati viLamba kAla presentation. The voice co-operated well to stretch to 3 octaves bringing the best of bEgaDe during kalpana swaras.
One gentleman behind another friend of mine had started snoring in a matching madra shruti. Can't blame him for the situation. May be he was in bEgaDe trance.

To our dismay, I believe the chit that was passed on to the artists, requested for bEgaDe (concluded based on the facial expression of all the 3 main artists who saw the chit) , which was indeed obliged !!!!!

tAna was elaborate and was well paced. I had started picking up the feeling of "bEgaDe overdose" but had to sit on.. Waiting for something more special to be offered. After the first 2 - 3 notes, TMK verified with others to check if that was what requested for ?? The tAna flourished in all possible directions bringing out the complete swarUpa of the rAga. It was followed up by "vallabha nAyakasya" which brought in pace back to the concert.

chANAro (devoid from previous presentation on jANAro or was my ears in a different state of mind .. don’t know) brought out the best of the emotions khamAs could pack in for a jAvaLi.

MukhAri AlApane took everyone for a roller coaster ride. With my limited music gyan, recognized the first phrases to be near mAnji, while my (more learned than me) music friend VS who was seated next to me recognized the initial phrases to be around bhairavi. Then came a more distinct mukhAri chAya that stood with me for quite some time. Both Raga and tAna were dealt in detail. HK Venkatram returns to the vocalist was a treat to ears.

The pallavi line with almost translates to "Let us all love this exalted human existence" may have been inspired by vocalist's recent award which has raised eye brows for all the controversial citation was presented. The rAgamAlika came in the pallavi line presentation that as swaras, which was a refreshing change to the routine swara rAgamAlika

HK Venkatram who was asked to present whatever was on his mind, took up lilting rItigauLa. In the same mood, TM Krishna took up a fast paced cEra rAva dEmira. Aligning to his usual experiment of ending the concert with a pretty grand krithi, I expected it to be the last delivery of the day. However, there was more confusion ensuing our way.

kAMbOdhi / harikAmbOdhi duel kept running in my mind ( seems like even the organizers fell trapped to this as seen in their initial report on their FB page which was later amended - My comments on their page has been deleted too !!) as the next he govinda he gOpAla was presented

A fast paced mIrA bhajan was presented as the conclusion of the concert.

As I walked out of the hall, was wondering about a coughing kid right behind me at the concert hall. A budding mridangist, he has been coughing since last 4 years as I get to see him only at Unnati, and I wondered how is he still alive, with cough not getting cured !

As I mentioned earlier, a tougher 75 is not as appreciated as an easy 100* in cricket, this concert had individually and masterly presented pieces. However, at the end, was not able to get a completeness feeling as I left the concert hall at 21.15. May be because, I have attended far better concert of this artist!
at August 07, 2016