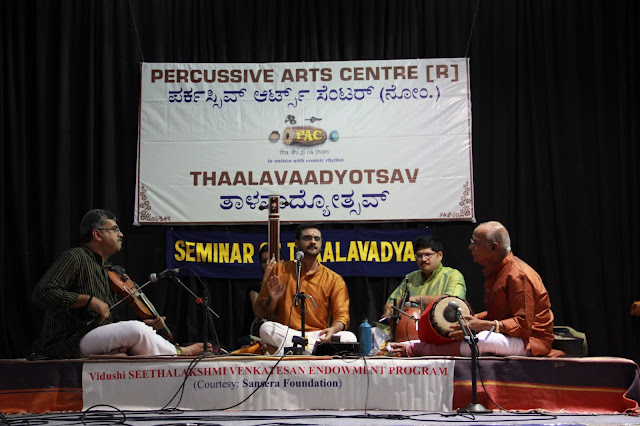 While the concert was organized at a venue that is a stone's throw away from my house, perhaps it is my home ground like what Wankhede is to Sachin Tendulkar. I was fortunately pretty early to the concert to attend an ongoing Special Thani Avartanam - Dandamudi Sumathi Rammohana Rao

It was followed by an another erudite "Anandalaya" lecture demonstration Vid. K Arun Prakash. It was so technically intensive; I could hardly appreciate with my novice understanding of laya. However, an interesting outcome was a small quiz question at the end of the demo, though I did not answer it loudly, I was almost correct. I could recognize the 4 akshara eDupu, albeit he wanted a complete answer of Tisra Nadai, 4 akhsara eDupu. 45 mins of lec dem was too short for all the information he had to share for us. May be that’s for another sunny day.

Minutes later the concert team billed for the evening occupied the stage with a special welcome to Vid. AV Anand who was delivering his 80th birthday concert. More about that later.

With a minimal setup (courtesy simple sound system and professionals manning the equipment) the artists were all set to deliver a stellar concert of the evening. I had a concert friend VS who had accompanied me to listen in spite of all the other engagements (that were kept aside for a few hours) made it all the more an interesting evening, which gave opportunity to exchange immediate views on performance we heard.

The first 2 songs were fairly aligned to the text book format. Nothing exceptional except the "shruti shuddate" demonstrated in the 2nd speed rendition of the Varna.

Customary 3rd song AlApane was a clean start with the distinct rAga swarUpa of jaganmOhini, reminding the way MS started her AlApane with a straight rAga chAya delineation in max 10 seconds to reach a perfect 10. I bet nobody expected an AlApane for jaganmOhini as now a day it’s hardly sung on the stage, even though rendered - only as a filler. An additional embellishment with kalpana swarAs added scholarly touch to the whole presentation. Vid HK Venkatram who had the opportunity to conclude replicating the last set of swarAs replicated vocalist manOdharma to the dot. Quite some goosebumps all around.

Without wasting time on the next filler, Vid. Ramakrishnan Murthy dwelled into a fairly elaborate pristine Anandabhairavi (did not allow my mind to think of rItigaula / any other similar ones), the ShyAmA shAstri's masterpiece was my guess in the making. Taking off from anupallavi, the vilambakAla krithi "marivere" was presented in apt tempo. There was no sense of hurriedness / drowsiness.

The next kAMbOdhi had an elaborate AlApane stretching into breadth and depths of the rAga. Though I’m not a fan of kAMbOdhi, he made me swing my head to the melodious presentation. I guessed it could be a tyAgarAja masterpiece (don't know why, but it turned out so). Gradual progressive sangati of "O ranga sAyi" was sufficient enough for the prayers to reach the lotus feet of the lord at "Devagiri Varaprada Venkateshwara Temple" which is situated across the road by 300 mts.

Open throated singing throughout the concert, his voice held well to dwell into detailed neraval. The neraval was very good with one exceptional Mega surprise at unique place " mAtula sahurula", yet brought out same grandeur as it would have at "bhUlOka vaikunta". A special Tani, longest piece of the day that followed was also to celebrate the virtuosity of the Octogenarian Master. Phanindra Bhaskar was the "non striker" end all through the concert, paving way for the mridangist to set the first imprint of laya throughout the concert.

Vinayakuni was yet another song started from anupallavi- presented as the organizer persuaded for a longer concert in spite of a train to catch.

The rAgamALika viruttam was very good with the last of them being kApi, paved way for a shorter presentation of "JagadOdhArana". It was presented leisurely though.

2 manOdharma I experienced for the first time were the take away from the evening.

It was an evening to remember, just for the pristine music from all the artists.
at July 17, 2016