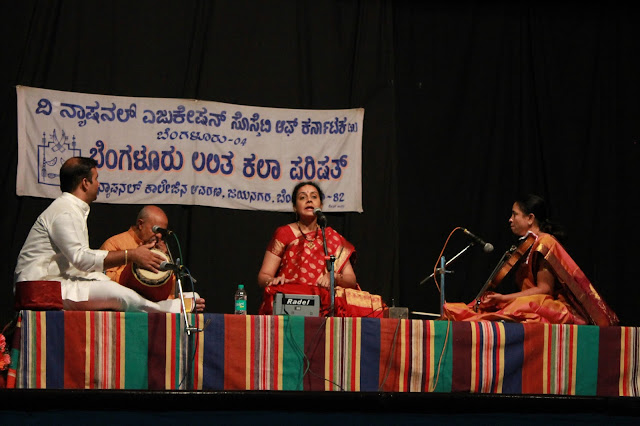 Having experience of previous concert being washed out, I started off early from office to be at the venue on time. Though the stage was ready and the artists too were raring to go, the audience were still pouring in.


Vid. Gayathri warmed up the evening directly with an invocation through gaULa kriti. Since there was no varNa, i was expecting swara prastara on this, which happened as expected.

A short sketch of karNaranjani was good and the kriti was rendered well. There were no further embellishments other than the original chitta swaras.

Vid. Gayathri has presented many lecture demonstrations and her repertoire on rare krithis is well appreciated . Today she took up a sindhu rAmakriya composition of muttuswAmi dIkshitar where she demonstrated the rAga mUrchana before dwelling in a sedate presentation of the krithi. The krithi was beautiful, there were no frills attached to it.

The first long AlApane was nice and done leisurely in shankarAbharaNa. The sedate AlApane was followed with a beautiful rendition of the kriti enduku peddala with neraval and swaras at 'vEdashAstra purANa. The sama kAla neraval part was rendered very well. Percussion duo  who had been hitherto rendering perfect accompaniments, explored their potential in a not so long tani. It was ended with full rendition of second chanraNa. The tani they shared was nice and the last kOrvai was strikingly fitting to the starting of the line in which neraval and swaras were sung.

Without a filler , she announced that she would be presenting a RTP in dhanyAsi. The rAga AlApane traversed the crests and trough of the rAga to bring out the essence. With an eDupu of 1 akshara, the presentation of pallavi went on in quick succession of sAhitya elaboration and rAgamALika in nATTakuranji and hEmavati. An interesting aspect of rAgamAlika was after the violin returns on nATTakuranji, she once again started dhanyAsi, nAttakurani and went on into hEmavati, which was once again returned on violin. All in all it was a soothing presentation at an apt speed.

With a surUTi short sketch, a nice rendition of the kriti sRi venkata gIrisham AlOkaye... was the lead composition amongst the bEhAg, rAgamAlike shloka and mangala.

Vid Gayathri Girish gave a brief and a memorable concert. Her AlApane (though only 3 ) were good and showed essential phrases to show the rAga bhava. It was nice to hear a heavy ragas handled at ease interspersed with simpler renditions. It was also apt choice of m.bhAgavatar's krithi as a mark of respect around his remembrance day (Jun 30). Her kriti renditions were aptly pced and did not show a sign of hurriedness. The sangatis fell in place with the correct gamakas and brigas. Tutled by Vid. TNS, she showed her own singing style which dd not have an evident trace to one school. The neraval and swaras were in right proportions.

Vid Nalina Mohan, was matching to the level of the Vocalist all through. She was a replacement artist to originally billed BK Raghu, did not disappoint to what rasikas expected.

Percussion duo BSPRashanth and VSRamesh did a good in job in accompanying the concert. Following all the pieces and played sahitya according to the mood of the concert was very evident. They played for all the sangatis enhancing the spirits of the rest of the artists.

The concert went on without a hitch on the part of the sound system. I had a word of praise to the sound engineer Mr. Keshava Murthy who was too humble to accept his contribution. Though the concert was not that well publicized by the sabha, the audience strength was comparable to the previous concert that I attended here 2 weeks ago.