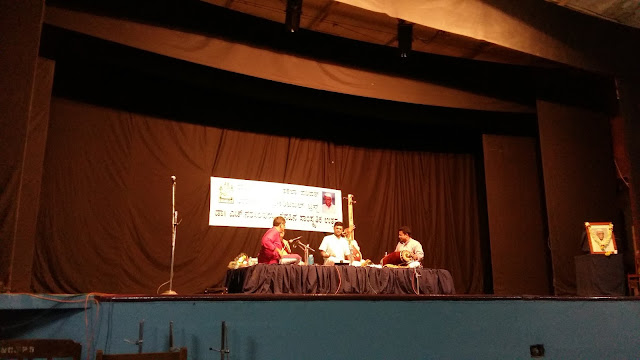 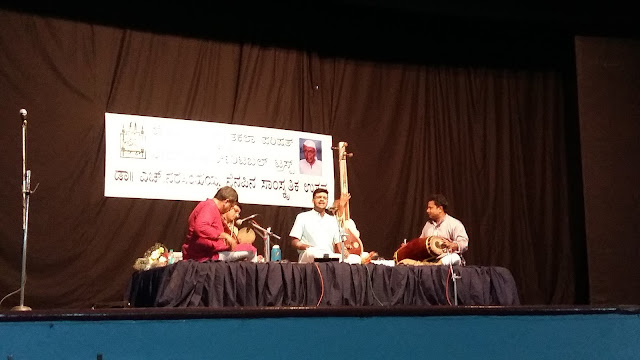 The onset of monsoon was around the corner when I received the invite to this concert through snail mail, and I had the worst fears in my mind, both of which came true. Poor publicity to the program and a possible evening rain in Bengaluru to play spoilsport even on the genuine Rasika who want to be there at the venue to listen to the concert.

It was 18.10 when I reached the venue, to be the second audience to enter into the hall. The rain had already created havoc from 16.30 and I had taken sufficient precautions to reach dry at the venue. I could hear the tambUri being tuned in the green room and spotted worried organizers of a possible poor turnout due to rains. The 2 successive evenings before had good turnout due to dry evening weather. 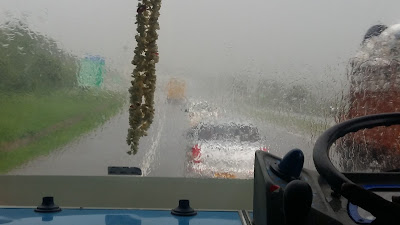 (Pic: Weather on my way back from office !!)

The concert started almost 15 mins late, as probably the organizers wanted a respectable size of the audience to assemble. The delayed start was further delayed by a detailed and anecdotal introduction by Sabha President.

But as fortune favours the brave, there was a warm soothing treat waiting for the ones who dared the odds. What followed for next 2 hours was a feast of pristine classical music. It was music for the sake of purists, without gimmickry, devout and soulful throughout the stretch of the concert.

With a good rendition of shlOka (sadguru gajAsya vAni in kalyANi) Ramakrishnan Murthy and team quickly jumped into Eta vunnAra. A detailed presentation of swaras ensured complete justice to the delayed start. The varNa was a welcome skip as he could do justice here.

hindOla that followed was elaborated very well and carefully. It was the need of the hour. After rains, Bengaluru had almost turned Ooty cold. The presentation brought in warmth amidst the cold breeze drifting across the auditorium as the doors were kept wide open. Apt to its association with feeling of swinging outdoor uyyAle bedecked with freshness and colours of flowers, Ramakrishna Murthy and H K Venkatram brought out various hues of the rAga during  nereval and swaras at 'yAdava kula muraLi'. The swara korappu in 4th speed by both of them left butterflies in the stomach.

There were no embellishments to nAttakuranji krithi, but the very kAlaparamANa at which it was rendered was apt and mellifluous. The song from Nandan charitram, Nandan rues his fortune of not able to have the darshan of lord from outside the temple as nandi is right blocking his darshan view. The bhakti bhAva was well articulated.

The main for the evening, surUTi AlApane was embellished with a lot of innovation and the kAlapramANa in which he rendered it in a slow tempo was very good. It took a few phrases of surUTi to bring out the picture of surUTi and after that ideas came in like a whirlwind and bang!! It was gone too. I was left with wanting for more at the end of 9 minutes of blissful surUTi.

With choices between tyAgarAja and dIkshitar, it was tyAgarAja who continued to rule the roost for the evening with gItArthamu kriti. The AlApane, neraval, and swaras were done true to textbook prayOga and carefully showing the quintessential pa ma ri s prayOga of surUTi time and again and last few halting on ma alone. It was nicely rendered with neraval and swara at 'vAtAtmajuniki'. With a lot of vintage sanchAra and swara patterns, the long kOrvai was quite different from the regular one added to final finishing touches as the concert drifted into a rather melodious tani.

'sowkhya' - describes the percussion team for the evening. I was wondering the sparse audience in the hall would add to amplified effect of a usually high-decibel tani. But this was an exception on the pleasant side. I have heard several live concerts of this team before but, never have I come out with this feeling of sowkhya ushered in by the same percussion duo. Both being seated across the vocalist, they enjoyed themselves with many mutual applauses "bhale bhale". They did not resort to loud banging the drum to produce more noise than music. The Audience would have thumbed it down. It was plain and simple, enriched the music that was being presented.

The concert concluded with 4 short pieces as listed.

HK Venkatram played to his potential in the solo versions of the rAgas and swaras. Having played to veterans like Semmangudi, he timed his AlApane to be brief but, captured the essence of the raga in them.

Ramakrishnan Murthy with an ideal team of accompanists, presented a nectar concert to remember for the fortunate audience who assembled. He was in best of his form, so were the accompanists who were all charged up, fed back to the main artiste went into a spiral and as a team, they delivered the best. The end result was rich and complete music. Thanks to Karnataka Lalita Kala Parishat for organising this team to perform. After listening to such performances, one is happy for our spiritual forutunes for bestowing us an ear for music and ability to take time out from our hectic vocational obligations.

PS:
I'm flabbergasted by the quality of the simple and vintage sound system at the hall. It has reproduced glitch free audio all through, as against complicated sound systems that had their own woes during Ramanavami season !!