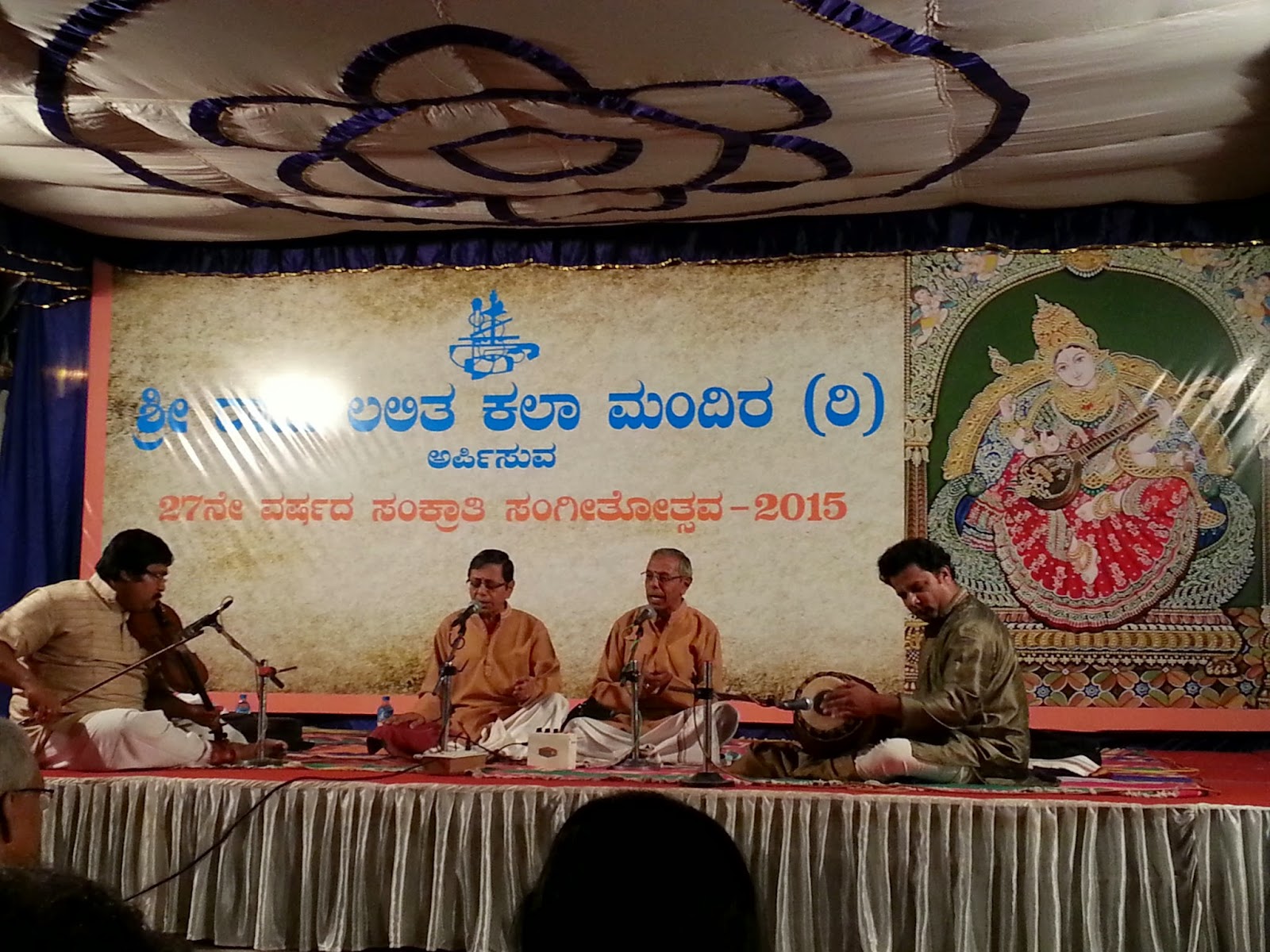 
The inaugural concert of the festival started after a short lamp lighting ceremony and speech by the ddignitarieswhich lasted for 15 mins. RLKM is known for short speeches and this was no exception.

The stage was already set and the artists took off to a flying start with a 2 speed presentation of kAMbOdhi varNa which did soak in the necessary nectar of kAmbOdhi.  The very first note to take off the rAga sketch indicated the richness of knowledge to present the rAga even in small span of notes.

The organisers had announced that it would be a thematic concert on rare compositions / rare rAgas. I was expecting a treat of new songs and rAgas and the concert lived upto its hype.

vridulakku was presented without much ado. A quick start off and a detailed nereval was the highlight of the presentation.

Im hearing bAla sarasa murali only second time in the last 6 years of my concert attendance.. which is a clear indication that its a rare krithi. Even though I get confused between simhEndramadhyama and kIravANi many times... this presentation was an exception. Could recognise it as kIravANi and there was no aspect of confusion throughout the presentation... did not even get a cross thought that it could be simhEndramadhyama !!

Sedate nIAmbari AlApane set the right foundation for the nIke dayarAda. Even this composition a rare one on the concert circuit, brought out the best of the artists and the rAga.

nIlAmbari took off the sheen from bhOgindra shAyinam, which is usually presented briskly. The artists who had presented a 30 min long nIlAmbari were not out of it.. as they presented this. It was rather slower than any other presentation that I have heard. It sounded nice and soothing though.

The best of the day was saved for the RTP that flowed in. It was for the first time I'm hearing nItimati on the concert platform and it was pretty intriguing as there was large traces of simhEndramadhyama and rasikapriya in first and second half of the scale. Had to dig through the scale notes to zero in on nItimati. Picking up a rare rAga for RTP itself indicates the depth and richness of knowledge among the artists. A simple pallavi line was followed by a series of rAgamAlika swaras where the violinist played after each vocalist.

A brief tani (indeed tani as there was no upa pakkavAdya) brought out the nuances of various patterns for chaturaSra triputa tALa.

The organizers have to be commended for an impeccable perfection in arrangements. The micAsura did not turn up even for an inaugural concert which is a deviation from the normal experience. The pendal around the boundary ensured that there is no great deal of disturbance from the traffic on the road and a kind of insulation from mosquitoes too !