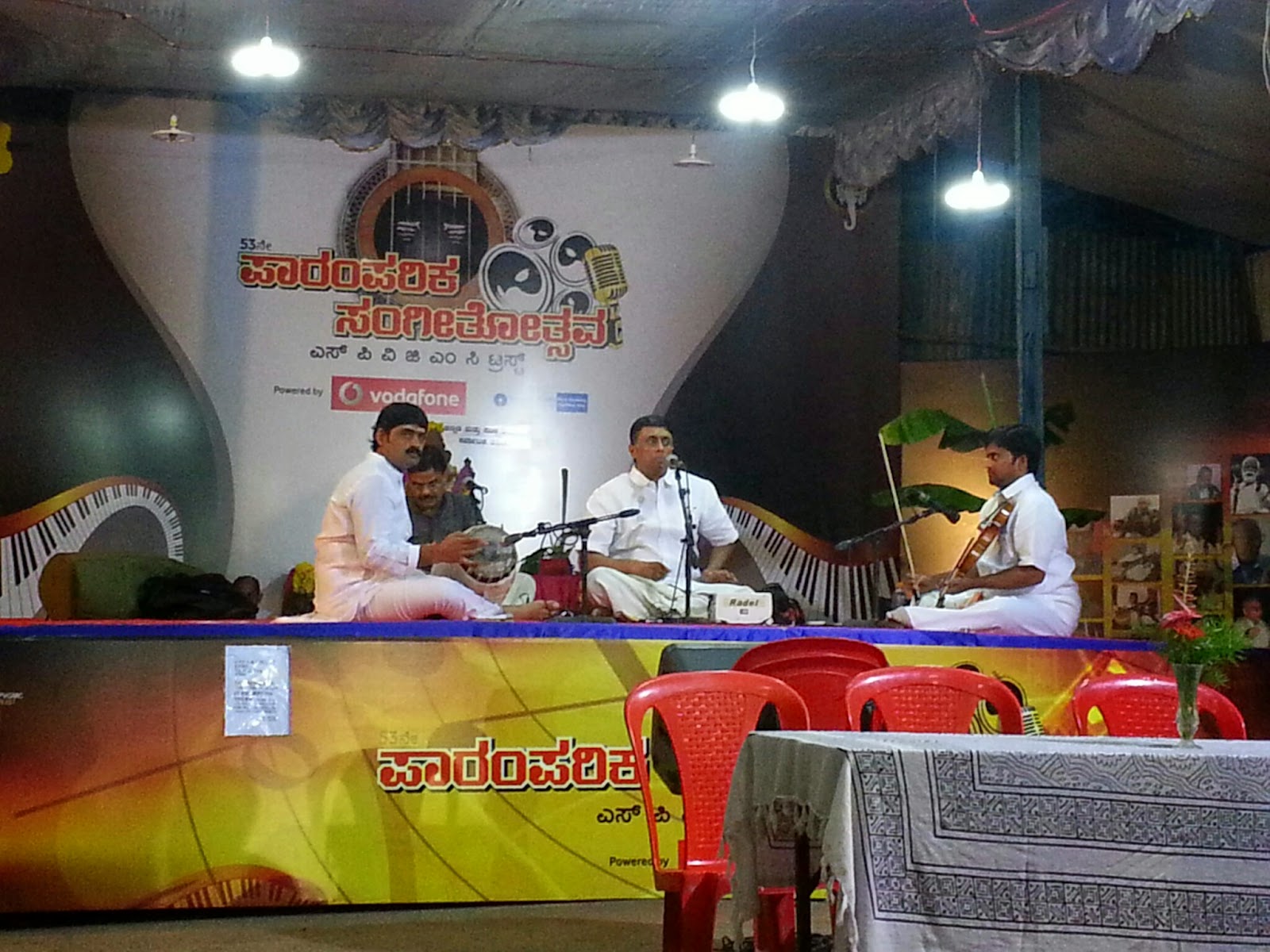 
It was a surprise for me when I saw this concert listing on the local news paper when I had travelled to my hometown to partake in the Ganesha Chaturthi celebrations. No second thoughts.. reserved the evening to once again spend with Sanjay.

Since this was the inaugural concert of the festival, was expecting a lot of VIPs to be attending the program and also delay the start. It indeed happened that way. It was raining all day long and I just prayed that it should not rain in the evening hours.

Program had a delayed start of 15 mins owing to wait for the chief guest to inaugurate. However since he did not turn up on time, it was magnanimity of the organisers to request Sanjay to start the concert.

Was expecting a full fledged Ganapathi thematic concert. However, the start with vanajAkshi varna indicated that it was not going to be that affair. Without much ado and improvisation, the composition was delivered.

Considering Sanjay's Varna and Main piece in same rAga format of cocnert, it started brewing a thought in my mind to think a Ganapathi song in KalyANi rAga.. though nothing flashed in my mind as I wanted to enjoy the moment and not brood over the future.

VinAyaka vighna nAshaka flowed in with a set of creative swara patterns. Added to that , it was an offbeat gaNEsha krithi that was presented instead of usual stuff in hamsadhwani. nannu kanna thalli in Sindhukannada was a quick filler.

AndhOlikA AlApane was pretty elaborate and was presented in leisurely fashion.. however the krithi was presented to its composed boundaries without any further elaborations into nereval / swaras.

chArukEshi Alapane set the foundation for a neat presentation of onde manadali krithi by purandara dAsa. Sanjay has been popularising this in recent times. swaras of chArukEshi was pretty refreshing.

After a very brief break for inauguration (Bangalore sabhas have to learn this... it was less than 5 mins !!) amba nilAmbari was presented in a sedate tempo.

A brief Alapane of mOhana provided sufficient clue for a possible RTP, which is usually not a standard for temple concerts. kAdambari krithi by mm.dIkshitar was a neat replica of what he presented in Unnati a couple of weeks back.
song gradually drifted into a tani that was almost treated as a part of the composition than just standing out.

Both the percussion artists demonstrated high levels of vidwat in multi staged improvisation of tani. It was indeed scintillating presented in a detailed 20 mins demonstration.

Without any filler, Sanjay broke into SimhEndramadhyama Alapane... It was 9.05 pm and I did not expect him to bat like a test batsman... starting off the alapane for RTP. It was developed in 2 stages before dwelling into a deep tAna. Pallavi in Adi tALa khanDa naDai was presented with utmost ease. This was indeed the surprise package for the evening.

The tail pieces included a composition in bAgEshri that was drifted directly from the last set of rAgamAlika swara of RTP. tilAng and khamAs songs filled the tail portion before mangala. The concert ended at 10.10 pm !!

Sanjay throughout the concert demonstrated a high level energy and the Air Condition (due to incessant rain) did not drain his energy levels.

It was indeed another memorable concert, the first one for me in this sabha. It was a well attended concert by over 400+ audience amidst the predictions of heavy rain.

A houseful 3.5 hrs concert could even be considered as a grand opening for a week long festival :)

The highlight of the concert was the masterclass from 2 masters on the stage on chArukEshi rAgAlApane and swaras that was as pure as honey :)

It was an evening well spent in the divine ambiance.

PS: An inebriated man walked up to Sanjay after bEgada (in the rAgamAlike) with a ten rupee note in his hand? He handed it to Sanjay and returned back. I was wondering where is he able to see a gOlaka to offer the money to the God !!

He took his seat in the centre of the aisle, who was whisked away by the organisers without much disturbance to the program
at August 31, 2014