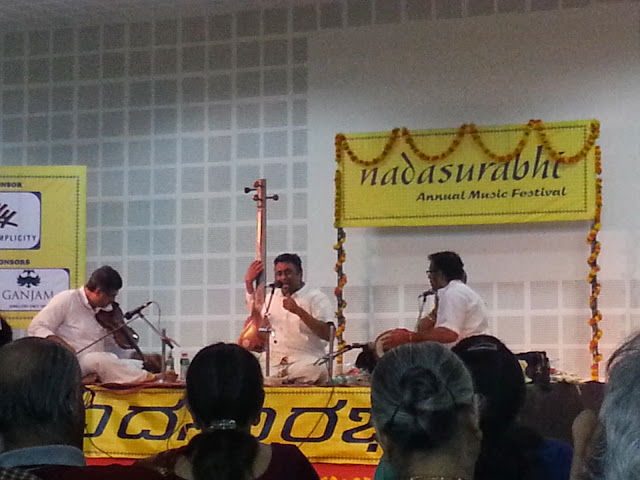 While I agree with Jayan in his review, Im just adding my views on the concert. When you have already tasted and still sulking under the achievement of a double century, you would certainly feel tasteless when you reach a 100 in the very next innings. We would not even have come to terms with the glory of 200. I had the same experience when i came out of the concert in comparison to what I heard in Bangalore Gayana Samaja a couple of weeks back.

Concert was indeed a cracker at the same venue by the same artist. The dhanyAsi of last year music festival at nAdasurabhi is still lingering in my ears

Arrangements at the venue has improved and over a period of time the hall has got used to the music system.  Certainly this place has one of the best accoustics as compared to other veteran sabhas in Bangalore. Parking space too is ample enough to accomodate the vehicles ferrying the audience.

Coming to the concert, I was in a dilemma to place a request for a song / not. finally decided "Not to" as the master would have already prepared to delivery a century.

And everything that happened after that is history. From the very word Go, Sanjay demonstrated the same form that other master (#SRT) demonstrated earlier during the day. It also reminds me of the introduction at the beginning of the concert, when the organiser drew a parallel between Sachin and Sanjay. (BTW.. I admire both of them)

First of my favorites came right after the varNa.. sObillu saptasawara. It was presented with all grandeur (for a song no 2 in the concert) of a soulful nereval.

The moment i heard the first notes of Anandabhairavi flowing down, the same AndOLikA vahanane came to my mind as i had read a review of the same song being presented to Chennai audience a couple of days back, and i was wondering when would Sanjay treat us with this song. And the hunch became a reality. One would certainly get carried away with the soulful rendering of Sanjay's rendition of Anandabhairavi.

I had never heard a pUrvikalyANi presentation by Sanjay inspite of attending a good number of his concerts. Really enjoyed the alapane and kriti. A 3 hr concert of Sanjay can never end without an RTP and the treatment of Sahana by Sanjay had masterly touch.

HKV could have scaled better heights understanding his potential and performances that I have seen earlier. KUJ and BRR played as a team throughout the concert.

Overall an excellent experience listening to a masterly performance by Sanjay and his team.
at November 15, 2013