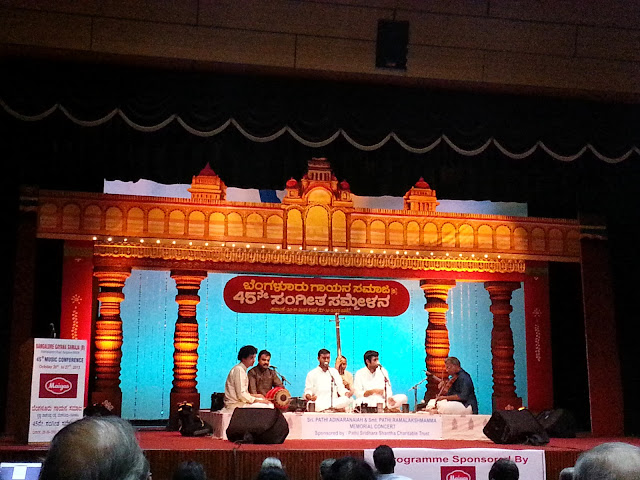 The concert  that lasted 20 minutes more than the scheduled 3 hrs had all the punch, classicism and quality required for a great concert.

Once the stage was setup for the show by  6.15 pm, the concert started with a brisk varNa. The humming before the varNa did not specifically indicate any rAga, but the started off with the AbhOgi varNa.

Mic played its role, at the end of the first song. MAS had to change his Mic to a pickup. The change of timber was very evident and it sounded hollow all throughout the concert ( I liked the first sound than the sound off pick up... In my view it marred the concert quality)

Swaras flowed like flooding Ganga..when the gaULa krithi was presented.

With a detailed HarikAmbOdhi..they elevated the standards of each krithi they presented.

It had just stopped raining... when they started off the AmruthavarSini Alapane. (pun Intended: It was more used to stop the rain than bring down the rain . Downpour was so heavy that it was disturbing the concert both to audience and the artists.) Krithi was presented short as compared to the detailed alapane. Brothers interwound the alapane with alternate sangathis. Except for the difference in the voice, one could not have concluded that it is a pair that is presenting the concert.

The same class was demonstrated even while the tODi and jOg Alapane were presented.

nannu viDachi was presented with a mellifluous tempo , Almost rAma decided to come down to be be an audience.

With least  ado, the mOhana krithi was presented. The senior of the Brothers was quick to start off tODi alapane even while audience were applauding. A detailed alapane in tODi ensured a full 1 hour slot for the main piece of the concert.

As it was almost 8.50 pm, organisers were quick to occupy the stage for a quick VOT. Junior Bro vetoed Senior Bro's offer to quickly close the concert.

The best package of the day was ready at 9.00 pm. Brothers offered a short RT, but it was no short.. it was presented in a detailed fashion in jOg and ragamalika swaras of mostly poplar rAgAs.

taruNi nyAn and pibare rAma rasam mellowed down the tempo of the concert to ensue that all the power packed presentation had the right icing.

Both senior accompaniments in Violin and Mridanga were pretty apt in their contribution ensuring the Brothers were always in the limelight. Morsing presentation during tani was exceptionally good.

Overall it was a good to great concert owing to 3.5 hrs of presentation with everyting that is required to showcase the talent.