When you are stumped with too many lucrative choices, it would always be a tough decision. But if the decision that is made turns out to be a super hit, you will further start believing in your 6th sense.

It happened the same way yesterday. I could have slurped hot hot soup and bonda at home watching Cricket Match / listen to Sreevalsan J Menon @ Gayana samaja in not so comfortable ambience. But I chose to do the second one inspite of a threat of a heavy rain in the evening.

Reached the venue on time and the preparations were in progress behind the curtains. The curtains came down at 6.15 to offer what could be one of the finest concert of this monsoon here in Bangalore. 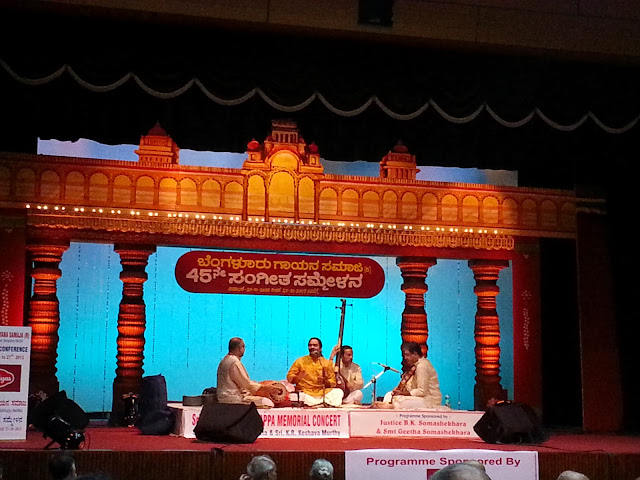 Sreevalsan J Menon and his team was in the right most frame of mind to deliver a great concert.

01 ErA nA pai tODi Adi PSI
Started with a guruvandana "Om namO vAsudEvAya" in memory of his guru for 18 years neyyATinkara vAsudEvan and dwelled into a vilamba kala presentation of varna in 2 speeds. The "kanchina kaNTa' was reverberating in the partially filled hall. It set the right mood for the rest of the performance.

02 dhanyDevvaDO dAsharathe malayamAruta paTNam subramaNya Iyer
raga sketch and a detailed set of swaras were presented at an apt gati. Even thought the composition was performed over 14 minutes.. it appeared as though it was much shorter than 8 minutes.

04 brihadambikAyai namaste vasantha m.dhIkshitar
A vennila presentation... no frills. was small in size but was rendered with good impact.

07 kAmbOdhi AlApane followed by O ranga sAyi kAmbOdhi Adi thyAgarAja
was as serene as it can be.... The AlApane had a touch of class and so was the composition presentation. Even though few... the manOdharma reverberated with good sangathies. Tani that followed was a memorable on with Tisra and Khanda naDai presentatation.

The most surprise package came after the speech, SJM asked for audience permission (time) to present a pallavi. And the justice was done with a 30 min rendetion of dhanyAsi RTP. Even though an old pallavi line in tiSra tripuTa, it was as refreshing as it could be. The nereval ended with a couple of tiSra and khaNda presentations. This made me feel it was worth ditching the other options that I had to spend the evening..

09 rAmA krishNaru manege bandaru
May be the artist is not as comfortable as other languages, barring a few wrong pronounciation of kannada words, the presentation soothed the whole concert to its end.

10 nI nAma rUpamulaku sourAShtra Adhi thyAgarAja
After a cuople of deep  breaths.. he concluded the concert with a vilamba presentation of the mangala.

Vid HS Sudheendra and Vid HK Venkatram were at their best. Being accoustomed to listening HSS accompanying pitch 5 artists, this was a welcome difference and would look forward to more of his performances accompanying male artists. (upcoming concert with TMK later in nAdasurabhi !!)

The trio performed as a team than 2 supporting 1.

Overall it was a memorable concert :) Thanks to my daughter who was very reluctant, but agreed for me to spend my time on music than at home.