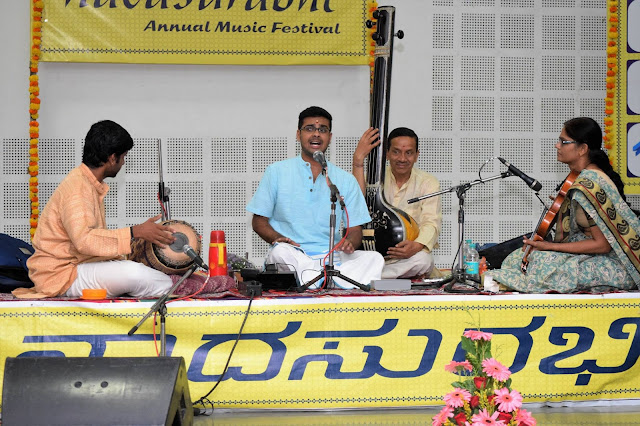 "Depth", "weight", "classicism" et al are words that are strewn about casually when a classical artiste is discussed; unfortunately, there is no unambiguous or objective definition of these terms. They are best experienced, rather than expressed. What may be deep to one rasikA may not be so to another; indeed, what seems weighty to me today may not be so with the passage of time.

Be as it may, RKM has struck me as a musician with a rare sense of refinement and proportion. He harks back to an era long gone; his peers in musical time are not the same as his peers in physical time. Before you jump on me for "equating" him to the late greats like SSI or MMI, I believe his approach to music is closely allied to them; he of course has to produce a greater body of work before he is formally inducted in to that hall of fame. God willing, he will achieve that, for his direction is correct but there is some distance to cover still.

Coming to the concert under discussion, it was another proof point of my hypothesis. His choice of ragas (bar ranjanI) was phrase based, rather than scale based. Even ranjanI was treated with clear phrasing, with there being no ambiguity right from the first bars of the AlApanE - no traces of dharmAvatI or vijayanAgarI.

asAvErI was a request from me, and I was mighty thrilled when he took it up as the first piece. Though the AlApanE was not elaborate, it was a goodish outline and the kriti was rendered neatly, with all three charanas being sung.

ranjanI was very reminiscent of the late MMI, who "owned" IMHO both this rAgA and the kriti that followed. Where RKM moved away from that tradition was in the choice of spot for neraval and swaras - he chose dharmAtmaka dhana dhAnyamu, with its swarakshara facility, rather than paluku bOTini sabhalOna. Of particular note was his MDResque attention to pada chheda, when he cleanly split the pallavi as dunmArgacarA adhamulanu; was immediately flooded with thoughts of mAyA-atIta svarUpiNI, sarasIruhA-Asana priyE ambA and koluva-amaragada!

tODI was a surprising choice at this stage, but no complaints! An elaborate alapanE with an equally good response from Charulata was followed by possibly my favourite kriti in the rAgA. My only carp, if any, was that he did not spend enough time on the chitta swara; one of the grandest pieces of composed Carnatic music IMHO. As an aside, I remember Sriram Parasuram mention in a lec dem that his guru (Sri T. Viswanathan) had analysed this chitta swara and concluded that there were as many as 14 different approaches to / treatments of the sAdharana gAndhArA in it!

Solo tani by N C Bharadwaj was powerful and a younger representation of the school he represents. Quite a few thrilling muktyAi which elicited bhale bhale from the other artists on the stage was long enough to evoke an equally thunderous applause from the audience.

A short but sweet jAvali in khamAs followed.

At this point, I was expecting him to launch into an RTP, and my senses were pointing to mAyAmALavagauLA or one of its janyas like sAvErI for elaborate treatment. So my joy knew no bounds when he launched into mAyAmALava gauLA! The joy was short lived though. After the violin response to the outline, he launched into mauLau gangA, and moved on to sahAnA, sindhu bhairavI and suruTi over the course of the slOkA. I was still hoping that he was going to spring a surprise by singing a rAgamAlikA RTP in these 4 rAgAs - using the sloka as a "coat hanger" for the AlApanE (the phrase is not my original - it was used by kalki to describe GNB's approach to rAgamAlikA slOkAs :).

Anyway, it was not to be. After singing the full verse again in surutti, he quietly segued onto mangaLam kOsalEndrAya - and you could have heard a pin drop in the auditorium! it was just about 2 hours into the concert, and folks just refused to believe that the show was over for the day. Even when he turned off the electronic tambUra, no one got up, till finally a few folks stood up to give a standing ovation that the music so richly deserved.

I later got to know that his voice was extremely strained and he was simply unable to continue singing. While his voice did show strain whenever he went higher up the scale, he managed to not let the music be affected. I hope and pray that this was a temporary set back, and not something more abiding. That body of work to take him to the hall of fame awaits!
at November 02, 2016