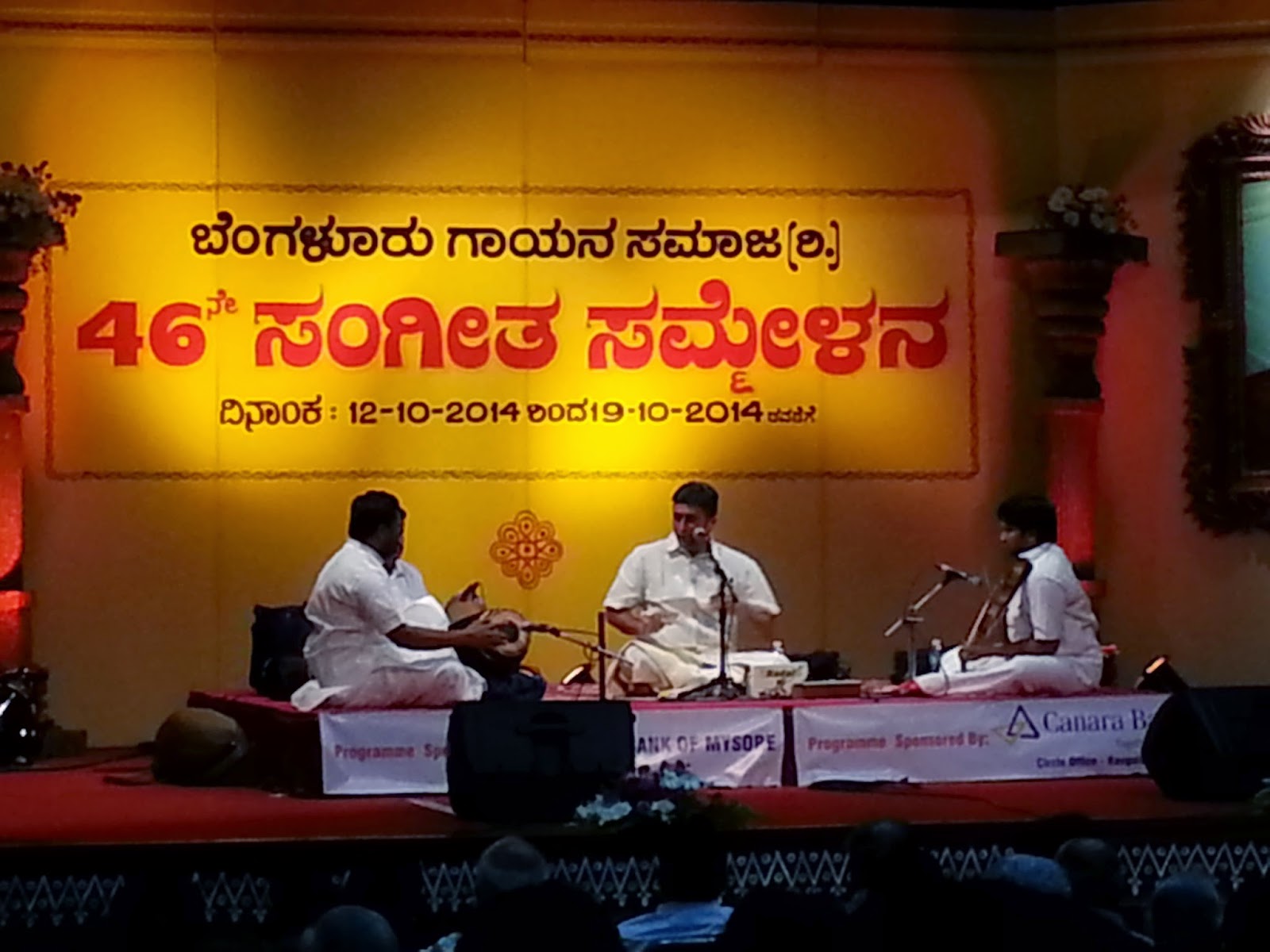 Sanjay's most looked forward concert in the series was indeed a blockbuster concert of sorts. Sanjay's has a learning quotient which always interests me . This concert had a spread of trinity and contemporary composers. Sanjay has been one artist who has always been presenting a new composition in every concert I attend of his, and this was no different.

The gaNanAtha invocation through a varNa in gauLa hit many targets at once, A varNa, A ganapathi invocation and a new composition for this stage.

Sanjay's flair for the Pallavi was demonstrated once again. His concerts are a matter of easy elegance in reality, a weave of knowledge, craft and vidwat.

The second number started with a little breezy touch of sahAna. The presentation could not have been shorter than this. There were no embelishments on this composition.


The detailed presentation of shAntamu lEka in sAma did justice to the missing alapana. The all traversing swaras was pretty refreshing. The sway in the swaras was complimentd by gentle breeze wafting across the auditorium. Even the rain and Wind Gods wanted to be audience to this concert.


The first AlApane of the concert came through vasantha bhairavi, for me it was another first (it may also be for many as its a rare rAga to be taken up for AlApane). Though it was concise both vocalist and violinist had sufficient opportunity to do justice to this rAga. prasanna vEnkaTeshwram, a composition of muttuswAmi dIxitar did provide ample opportunity through brisk swaras to demostrate vid. VaradarAjan's dexterity on the instrument. The swaras of vasantha bhairavi were bit too short but I liked his ideas immensely.

Third Alapane of the concert came in the form of chArukEshi.. It was ehanced and further emebllished to the version I heard in Mysore in his recent concert. The purandara dAsa composition "onde manadali" was well presented and was top class. The swaras followed up well - with a lot of alankara swaras.

While many artists pick a breezy numbers before the main, Sanjay did exactly the opposite. the husEni number was pretty refreshing. Sanjay is not know for slow numbers, but this was indeed presented in the right most tempo.

The main came in the form of kIravANiRTP. rAga was developed in stages during rAga AlApane. The tAna too took almost equal amount of time. rAga tAna was longer than chArukEshi presentation. Stagewise development also received staged applause at every transition. Audience thouroughly enjoyed the whole presentation. Of late, Sanjay has been singing simple tALa pallavis, however, today he selected a togher one in chaturaSra tipuTa khaNDa naDai (after 5 beats on the first anga eDupu). I may be wrong in the eDupu identification, however it was indeed a tricky one.

NaDais were switched at the end of detailed nereval on the pallavi. Without venturing into rAgamAlika swaras, the concert drifted into a detailed tani. Both mridanga and khanjira vidwans presented their vidwat receiving applause at each transition. The hall too filled with loud tAla tapping by audience.

Varadarajan was as  solid , not much of contribution till the rAga Alapanes in  started . Neyveli Venkatesh was exceptionally - he is getting great nAda out of his instrument. Liked every touch of his inclusive of tani - he was giving more space to Sanjay by playing a right quota of tani.

Overall an excellent concert for 3 hours and 40 mins

Unfortunately, the hall was too small for Sanjay’s concert. Sanjay has come to a level and even if we arrange a concert in Palace Grounds, it will be full. The hall needs a makevoer both on seating and acoustics.There were many late comers who were listening from temporary plastic chair arrangements even till the end of concert shows the respect and interest they show to their beloved Sanjay.

It was indeed an evening well spent. The concert will keep ringing in the ears for a long time to come as President MRV Prasad said.

PS: The seasoned hearts of Bangalore too added their noise a bit thought cough and sneeze, who could not bear the change in the weekend weather in Bangalore.
at October 20, 2014